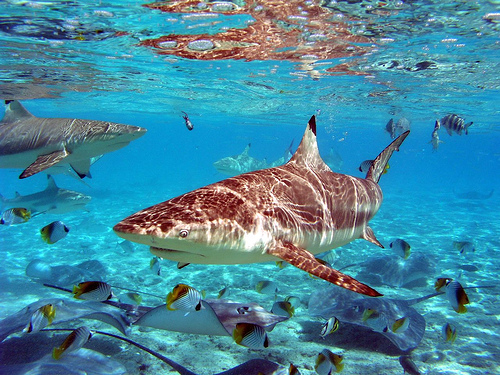 Sharks have roamed our seas for more than 400 million years, which means they evolved nearly 200 million years earlier than the first dinosaurs. During all this time, sharks have either shared or solely owned the position of the top predators in the marine food web. There are more than 400 different shark species, most of which can be found in coastal regions. They are present in every ocean of the world, with some species also inhabiting rivers.

Sharks belong to the class of cartilaginous fish, along side rays and chimeras. While the skeleton of all other fish is made of bone, the skeleton of sharks is made of cartilage. Cartilage is lighter and more flexible than bone allowing the shark to make tight turns quickly and to stay afloat.

Sharks are a remarkably diverse group of fish. The largest species – the whale shark – can grow up to 12 meters in length while the smallest species – the dwarf lanternshark – only reaches a size of 17 centimeters.

Most shark species are top predators feeding on fish, seals, penguins and even other sharks. Some of the largest species, however, such as the whale shark and the basking shark, feed only on plankton.

Sharks have seven senses – the five that they share with humans, plus an electrical sense (small pores detect minute electrical currents in the water) and a lateral line (pressure sensitive cells beneath their skin) both of which help them detect prey and avoid predators. A shark’s brain shows the importance of smell to sharks – up to two-thirds of its brain's total weight is taken up with processing the olfactory sense.

Some sharks lay eggs, but most give birth to live young. Female spiny dogfish have one of the longest gestation periods of any animal, carrying their developing pups for nearly two years. Indeed, females from the Northeast Pacific do not reproduce until they are 35 years old. In general, sharks grow slowly, mature late and produce few young over long lifetimes, leaving them exceptionally vulnerable to overexploitation and slow to recover from depletion.

One-third of European sharks qualify for inclusion on the IUCN Red List of Threatened Species. Although protected by several countries, they remain at risk while migrating across unprotected waters. As key predators, their depletion also poses risks to the health of entire ocean ecosystems. For example, the presence of tiger sharks has been linked to the quality of seagrass beds through their prey, dugongs and green sea turtles, which forage there. Without tiger sharks to control their prey’s foraging, an important habitat would be lost.