CMS-supported NGO Cracks Down on Poaching in Gabon 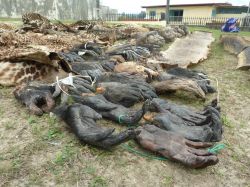 Bonn,
18 January 2011 - The Gabon-based NGO Conservation
Justice, which CMS supports as one of several donors, has
facilitated, in close cooperation with Gabonese authorities,
what is probably the biggest arrest related to ape poaching
yet in Africa!

Thirteen ape heads, 32 ape hands (gorillas and chimpanzees),
12 leopard skins and several elephant tails were confiscated
during the operation. Three dealers were arrested and will
be brought to justice.

A team comprised of Gabonese law enforcement officers,
representatives of the Ministry of Water and Forests (MINEF)
and the Conservation Justice team planned the arrests, and
carried them out on 13th January in Libreville. The arrested
dealers confessed to having been involved in the animal
parts trade for several years, and their impact on species
numbers during this time must have been significant. Putting
them behind bars will probably have a direct beneficial
impact on the lives of hundreds of chimps, gorillas, leopards
and other threatened species. The indirect effects of such
crackdowns, such as a new awareness of the end of leniency
towards wildlife crime in Gabon, should also be substantial.

Some months ago, Conservation Justice orchestrated a similar
strike targeting ivory dealers. Despite several attempts
to buy themselves free, the ivory dealers remain jailed,
showing that enforcement is being taken seriously. Conservation
Justice will work to ensure that prosecution is dealt with
in a correct manner.

CMS congratulates Conservation Justice, the Gabonese law
enforcement authorities involved and the Ministry of Water
and Forests for these great successes, which send a clear
message to all poachers that illegal activities will no
longer be overlooked.