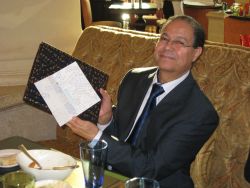 Bonn, 29 December 2011 - Lahcen El Kabiri
joined the CMS Secretariat as Deputy Executive Secretary
in the autumn of 2004, where the extensive knowledge of
North African conservation issues he had gained while working
in the Moroccan Ministry of Environment stood him in good
stead to lead CMS’s flagship Sahelo-Saharan antelope
project to restore their populations in 14 countries in
North Africa.

During his time in Bonn, a number of instruments were developed,
notably the Memorandum of Understanding (MOU) on the Monk
Seal, the Dugong and Raptors. He was also closely involved
in the coordination with SINEPAD (Secrétariat Intérimaire
du Volet Environnement du NEPAD) of the interim secretariat
overseeing the MOU on the marine turtles of the eastern
Atlantic.

He left CMS’s Bonn HQ in May 2009 to establish and
lead the new CMS/Abu Dhabi Office, from where the Dugong
and Raptors MOUs are being administered and which is helping
to boost the profile of the Convention in the region. He
leaves the CMS/Abu Dhabi Office with its future secured
with adequate financial resources for its operational activities
from the host country, the United Arab Emirates for a further
three years. His colleagues at the CMS Secretariat wish
him a long and happy retirement in Morocco.