Second Meeting of the Technical Advisory Group to the Raptors MoU 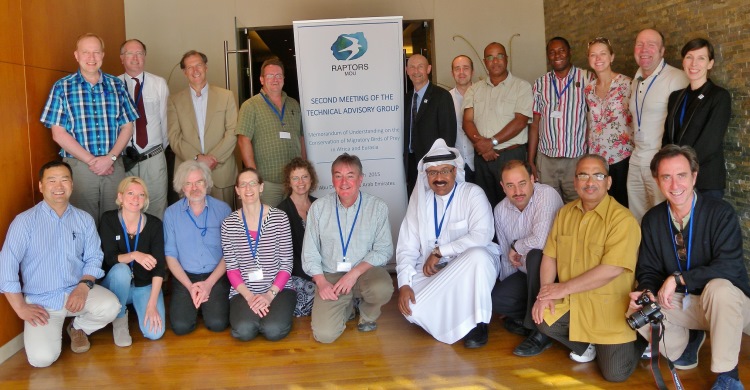 Abu Dhabi, 19 March 2015 – Twenty specialist ornithologists gathered this week at Yas Island, Abu Dhabi, United Arab Emirates to discuss and develop conservation responses to the main threats to migratory birds of prey, within the framework of the Memorandum of Understanding on the Conservation of Migratory Birds of Prey in African and Eurasia (Raptors MoU).

Professor Des Thompson, Chair of the Technical Advisory Group (TAG) to the Raptors MoU, commented: “Members of the TAG have worked incredibly hard to develop the evidence base underpinning our concerns over the threats to migratory raptors.  It is especially pleasing to see the immense progress made by the Saker Falcon Task Force to develop the Saker Falcon Global Action Plan (SakerGAP).”

Birds of prey are threatened by a wide range of human activities: habitat loss and degradation caused by urbanization, infrastructure development and agricultural intensification; electricity power grids create risks of collision and electrocution with power lines; poisoning generates both direct and indirect impacts on birds of prey; and, persecution in the form of illegal killing, taking and trade associated with sporting shooting, taxidermy and consumption.

During the four day meeting, the TAG developed a range of recommendations proposing actions that can be taken by Signatories and Range States of the Raptors MoU to address these key threats.  Following on from catastrophic declines in vulture populations in Asia in the 1990s, this unique group of species is now under extreme pressure throughout the Africa – Eurasian region.  A range of measures were developed by TAG to conserve vultures including plans for a Year of the Vultures campaign.  In addition, the TAG is taking forward work to develop a comprehensive guide to the technologies currently available for the research and monitoring of birds of prey, including details of the purposes, benefits and risks associated with each tool.

Nick P. Williams, Head of the Coordinating Unit of the Raptors MoU said: “Birds of prey are under threat throughout the world.  These species are sentinels for healthy ecosystems, critically important for our own survival.  Migratory raptors are especially threatened due to their arduous annual journeys.  TAG brings together respected raptor specialists to support Signatories and Range States to implement the Raptors MoU to conserve these species throughout the African-Eurasian region”.

A Report of the meeting will be published on the TAG2 webpage in due course.  And TAG members will continue working to prepare a full report to be presented at the Second Meeting of Signatories to the Raptors MoU, scheduled to take place in Norway in early October 2015.

The TAG consists of regional representatives and expert members that are nominated by Signatories to the Raptors MoU.  The aim of the group is to provide specialist advice, information and recommendations on the implementation of the MoU to Signatories and the Coordinating Unit of the Raptors MoU.  The First Meeting of the TAG took place in January 2014, in Edinburgh – a Report of the meeting can be found here.