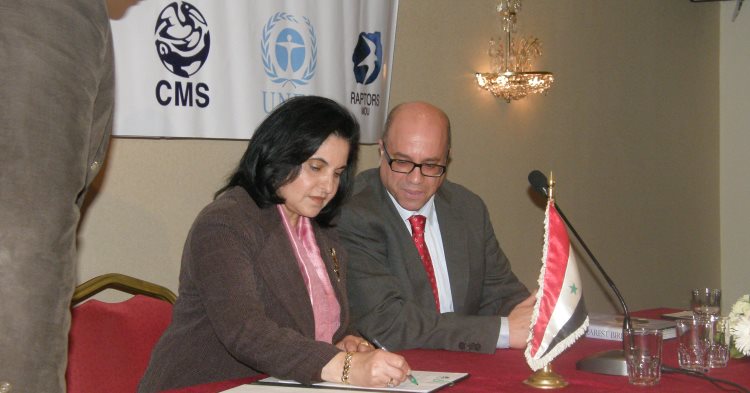 Abu Dhabi, 28 January 2015 - The CMS Memorandum of Understanding on the Conservation of Migratory Birds of Prey in Africa and Eurasia (Raptors MoU) has now attracted signatures from 49 Range States and the European Union.

Almost half of the 76 species of migratory raptors covered by the CMS Raptors MoU occur in Syria and Lebanon.  Both countries are Range States for the Saker Falcon (Falco cherrug) and Egyptian Vulture (Neophron percnopterus), both species listed as ‘Endangered’ on the IUCN Red List and in Category 1 of the Raptors MoU.

“Syria and Lebanon are geographically located along one of the most important flyways in the world for birds of prey.  More than a million raptors pass over these countries twice a year, in Spring and Autumn, so the signatures of these two countries is a welcome step that reinforces internationally coordinated efforts to conserve this varied and spectacular group of birds.  We look forward to collaborating with both countries to address the many threats they face” said Nick P. Williams, CMS Programme Officer - Birds of Prey.

The CMS Raptors MoU is a unique multilateral environmental MoU covering migratory populations of birds of prey occurring in Africa and Eurasia. The number of Signatories has almost doubled since it was established on 1 November 2008.

The CMS Raptors MoU entered into effect in Syria and Lebanon on 1st January 2015.