IVAD 2014: Update on Collaboration on a Flyway Action Plan for the Endangered Egyptian Vulture 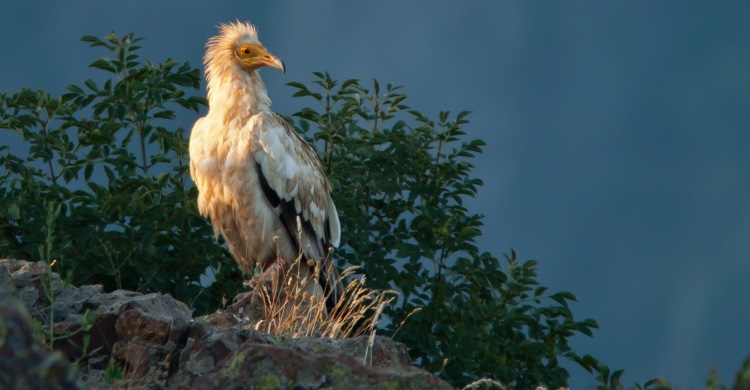 International Vulture Awareness Day (IVAD) 2014 offers a unique opportunity for the Coordinating Unit of the CMS Raptors MoU to celebrate its collaboration with the Bulgarian Society for the Protection of Birds (BSPB – BirdLife Bulgaria) to develop a ‘Flyway Action Plan (FAP) for the Conservation of the Balkan and Central Asian Populations of the Egyptian Vulture (Neophron percnopterus)’.

Vultures are a vitally important group of birds.  As Nature’s avian scavengers, they provide critical ecosystem services by: playing a vital role in nutrient cycling; leading other scavengers to carcasses; and, reducing the risk disease contamination by quickly consuming decomposing carcasses. Unfortunately, most species are under pressure and some are facing the threat of extinction.  Populations of vultures have dramatically declined during recent decades due to direct and indirect poisoning, persecution, electrocution, reduced food availability due to land-use changes and other human-induced factors. There is a pressing need for internationally coordinated actions to protect them.

The development of this Flyway Action Plan is being led by BSPB, and is a continuation of the successful Egyptian Vulture Fieldwork Capacity Building Project delivered in North-East Africa in collaboration with the Raptors MoU in 2012-2013.  The Flyway Acton Plan exploits synergies between the objectives of the Raptors MoU and BSPB's European Union Life+ funded project to develop an Action Plan for the population of Egyptian Vultures in the Balkan region, by extending its scope to include the Central Asian breeding populations, which are believed to partially share the same flyway.

Nick P. Williams (Head of the Coordinating Unit) said ‘The Egyptian Vulture is an iconic migratory bird of prey.  It is classified as globally endangered by IUCN and listed in Category 1 (Threatened species) of the CMS Raptors MoU due to serious populations declines both in Europe and India in recent decades.  Concerted international conservation actions are urgently needed to address the many threats it faces’.

An Egyptian Vulture Working Group has been established involving a wide range of specialists and stakeholders in countries within the species’ range, particularly in the Balkans, Central Asia, Caucasus, Middle East and Africa.  Up-to-date information is being gathered and collated about its migration routes, settlements areas, habitat use and the proven threats to the species along the flyway and in the wintering grounds.  The Flyway Action Plan will be a pivotal tool to guide future international conservation measures to ensure the survival of the Egyptian Vulture throughout its range.

An international Action Planning Workshop is scheduled to convene in Sofia, Bulgaria in July 2015, with the final version of the Egyptian Vulture Flyway Action Plan due to be published by the end of the year.  Government representatives, specialists and other stakeholders interested in contributing to the Egyptian Vulture Flyway Action Plan are invited to contact the Coordinating Unit of the Raptors MoU at [email protected].

International Vulture Awareness Day (IVAD) is celebrated each year on the first Saturday in September. Its aim is to publicise the threats faced by Vultures throughout the world to a wider audience and to highlight the important work being carried out by conservationists.  Find out more on IVAD website.