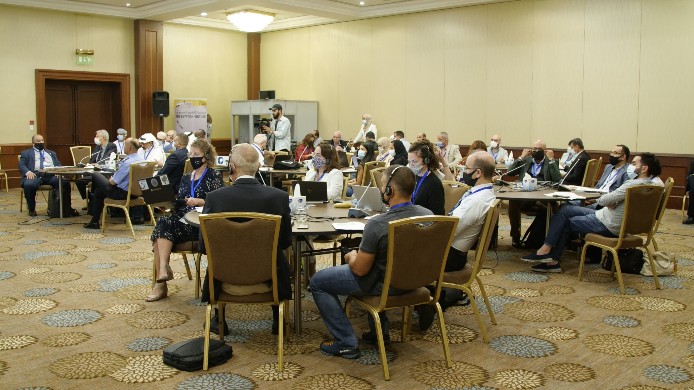 Dead Sea (Jordan), 24 October 2021 - The Convention on Migratory Species (CMS) is supporting range states in the Arabian Peninsula, Iraq, and the Islamic Republic of Iran in the development of an action plan to address the illegal killing, hunting, trapping, and trade of wild birds (IKB), which is considered the greatest direct threat to migratory birds in the Middle East.

CMS recognized IKB as a serious threat to many migratory bird species as far back as 2014 when the Conference of Parties endorsed the creation of the Intergovernmental Task Force on Illegal Killing, Taking and Trade of Migratory Birds in the Mediterranean (MIKT) in conjunction with the Secretariats of the African-Eurasian Migratory Waterbird Agreement (AEWA), the CMS Raptors MOU, the African-Eurasian Migratory Landbirds Action Plan (AEMLAP), and the Bern Convention. Countries were urged at COP13 to commit to adopting a zero-tolerance approach to any deliberate IKB and a full and proactive role in fighting against these illegal activities.

A first workshop was held on 24th October 2021 in Jordan to establish a road map to tackle IKB in the Middle East. It gathered key governmental and civil society stakeholders in the Middle East to foster regional understanding of the problem of IKB, evaluate the current situation and discuss the possible solutions to this problem.

Currently, the jointly agreed framework for action for CMS and the Bern Convention is the Rome Strategic Plan (2020-2030) which aims for a 50% reduction of the scope and scale of IKB by 2030 in the Mediterranean countries. To achieve this, national IKB action plans are needed to address the threat nationally and monitor the progress.

The workshop, organized by BirdLife Middle East and the Royal Society for the Conservation of Nature (RSCN) in Jordan, and supported by CMS Raptors MOU, brought together representatives from 11 Middle Eastern countries, including Lebanon, Syria, Oman, Bahrain, Iraq, Yemen, Egypt, Saudi Arabia, the United Arab Emirates, Iran, and Jordan.

During the workshop, various issues related to birds were tackled, such as the status of IKB in the Middle East, the region’s legislative framework and law enforcement, raising awareness through communication, national action plans to combat IKB, and other Middle East-related topics. Fruitful discussions were organized to find appropriate solutions and plan for the implementation of relevant international agreements.

Discussing the context of the IKB in the Middle East showcased the need to more integrated studies that take socio-economic and political dimensions into consideration, and the need to foster regional collaboration regarding cross-border hunting activities and illegal trade, taking advantage of having the Raptor MoU being based in the region.

Revising the legislative framework and law enforcement of IKB in the Middle East indicated that there are successful hunting laws and restrictions in the region that can be replicated. Nevertheless, there is a need to revise hunting legislation at the country level to be harmonized with international commitments and enhance IKB enforcement responsiveness by relevant authorities in the Middle East.

Monitoring IKB activities in the Middle East must be shifted from rigid monitoring methodologies into easier, simpler, and straight forward monitoring principles, that use indicators, adequate to the region.

Highlighting IKB stories from the region showcased the importance of promoting these examples as models to support the actions against IKB and using social media platforms to raise public awareness. Previous experiences had led to the conclusion that we need to develop IKB stories, that are reflecting the region’s own authentic heritage and philosophy, in Arabic for better impact.

The high interactions and discussions between participants, and identifying knowledge gaps, reflected the need for a common framework for regional cooperation in the Arabian Peninsula, Iran, and Iraq similar to the Rome Strategic Plan.

A second online workshop involving the range states of the Arabian Peninsula, Iraq, and the Islamic Republic of Iran, was held on 16 February 2022. The participants provided further inputs to the draft action plan and further defined the next steps toward the definition of the institutional framework to be proposed at the next COP14.