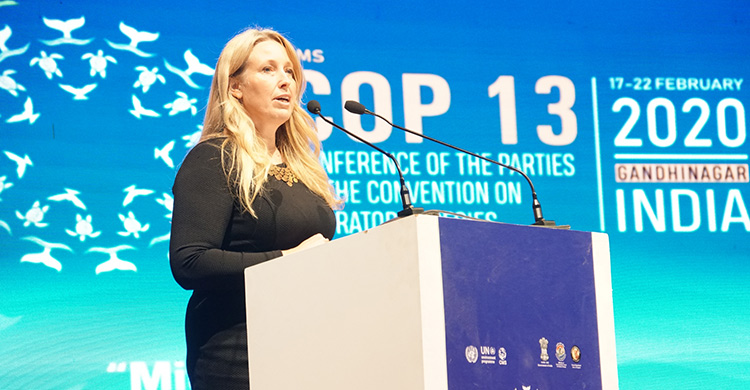 Gandhinagar, 17 February 2020 - The Coordinating Unit of the Raptors MOU is delighted to announce that Ms. Sacha Dench has been appointed as Convention on Migratory Species (CMS) Ambassador at the Thirteenth Meeting of the Conference of Parties to CMS (CMS COP13) in Gandhinagar, India.

Three CMS Ambassadors have been appointed in recognition of their achievements to raise awareness of threatened migratory species and their habitats. Ms. Dench will act as CMS Ambassador with a focus on avian species given her strong connection to the conservation of birds. She joins Mr. Ian Redmond who has been appointed as CMS Ambassador for terrestrial species and Mr. Randeep Hooda, appointed for aquatic species.
With a 20-year track record as a conservationist and motivational speaker, Ms. Dench is the co-founder and CEO of Conservation without Borders, a charity that supports leading conservationists and scientists by creating media, public and political support for their work.
Ms. Dench’s flagship project was a courageous three-month expedition called Flight of the Swans that brought international attention to the conservation status of the Bewick’s Swan. She flew a paramotor solo over 7,000 km across eleven countries from the arctic region in Russia to the United Kingdom (UK). The Bewick’s Swan is a European endangered migratory bird that is subject of an International Single Species Action Plan developed under the African-Eurasian Waterbird Agreement (AEWA). The expedition engaged millions of people along the flyway, gaining public interest and significant media attention.
Ms. Dench plans to replicate the success of the Flight of the Swans with a new expedition called Flight of the Osprey that aims to highlight the threats faced by migrating Osprey and other wildlife. The paramotor expedition will follow the Osprey’s western flyway from the UK, across the Mediterranean Sea and finishing in Ghana. This mission will provide a unique bird’s-eye-view of the Osprey’s migratory route whilst collecting vital data on the challenges faced along the way. The project will engage communities and politicians on the ground along the flyway, encouraging the attention of local and international media and raising public awareness of the plight of migratory birds of prey.
Ms. Dench, together with an expert behaviour-change psychologist in her team, will work with the CMS Vulture MSAP coordination team and others whilst in India at CMS COP13, to develop another Conservation without Borders project that can help bring the vulture crisis to life and help conservationists working on different threats in different parts of the world, to drive change.
“Many vulture species will actively fly with a paraglider, sharing thermals. It is amazing to be so close to these magnificent creatures and get a glimpse into their world of moving air and thermals that is invisible to us from the ground. Flying with them in key areas could also give us unique and engaging insights into our world below from their point of view - from why powerlines and turbines are a problem in certain areas and what we could do about it, to understanding their preferred routes and roosting sites, and what senses they might be using to identify food, and why they are subject to poisoning. And on their long journeys, what other threats might they face that scientists might not yet have seen from the ground” said Ms. Dench.
Over the next three years, Ms. Dench and her team at Conservation without Borders will work closely with CMS to identify priority issues and migratory routes.
Ms. Dench said “My approach is to work with scientists and other experts already working in the field, to identify the target audiences – which might be individuals or whole communities - and how they can help. I then look at the species involved and the people working with them, to find the most powerful stories we could tell to inspire wonder and curiosity amongst those target audiences, so they want to help. As with the swans, the challenge might be figuring out the best ways to tell those stories – whether that is through the media, meetings, film showings, or in some cases dropping out of the sky with just a paraglider and a story to share. We will also be working with international broadcasters including news networks, to promote the importance of migratory species to all of us. We will aim to find a way for those powerful stories to reach a mass global audience and promote the importance of CMS in driving global collaborations.”
The Coordinating Unit of the Raptors MOU would like to extend its sincere appreciation to Ms. Dench for taking up this position as CMS Ambassador and look forward to a close collaboration over the coming years.