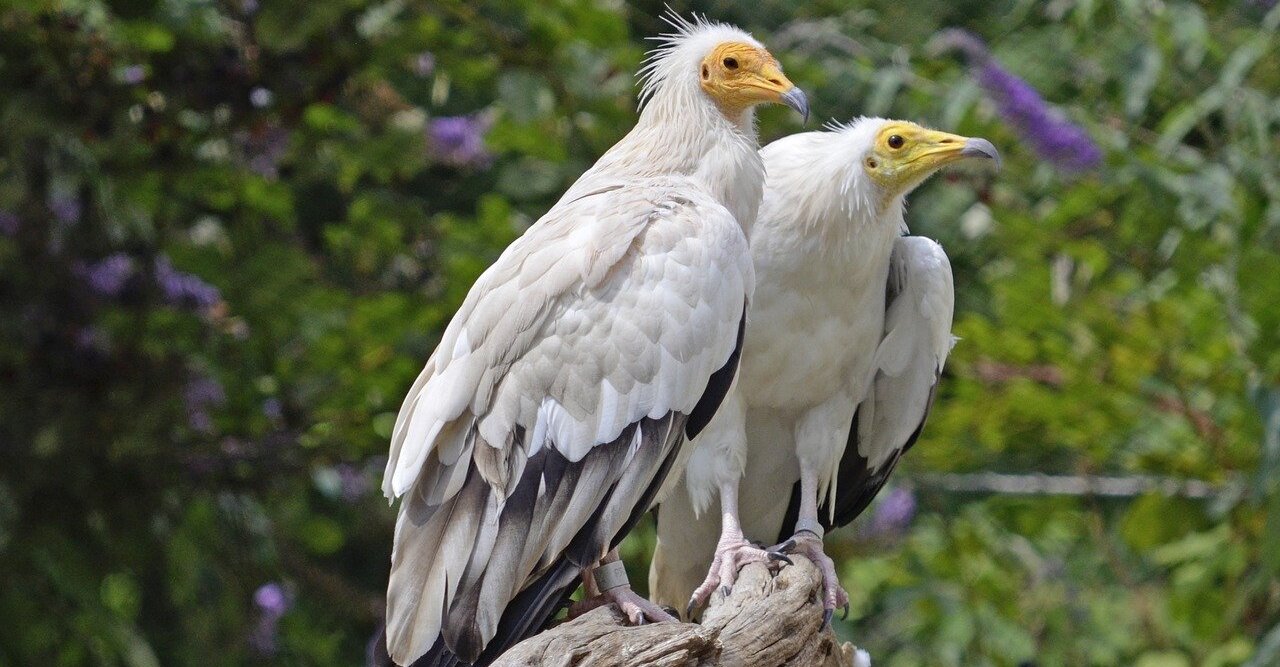 Abu Dhabi, December 2019 - A striking bird with yellow and cream-colored plumage, the Egyptian Vulture is the only vulture species that annually migrates over long distances. In the past few decades, populations have declined drastically and the Egyptian Vulture is now listed as endangered by the IUCN. In Europe alone, the population has seen a decline of over 50 % in only three generations, and numbers continue to fall.
In 2017, in a bid to reverse the worrying trend, the Coordinating Unit of the CMS Raptors MOU joined forces with 14 countries from the Balkans, the Middle East and Africa under the Egyptian Vulture New LIFE Project.
Funded by the LIFE Programme of the European Union, the project implements the Flyway Action Plan for the Conservation of the Balkan and Central Asian Populations of the Egyptian Vulture, which is a key component of the CMS Vulture Multi-species Action Plan to conserve 15 species of Old World Vultures (Vulture MsAP). In conjunction with BirdLife International, the Vulture Conservation Foundation, and the IUCN Vulture Specialist Group, the Coordinating Unit led the strategic development of the Vulture MsAP, which was adopted by CMS Parties in November 2017.
“The Coordinating Unit worked closely with BirdLife Bulgaria and all Range States to develop the Flyway Action Plan for the Egyptian Vulture. This ambitious New LIFE project, sponsored by the EU, effectively implements this challenging plan in 14 countries along the flyway,” said Nick P. Williams, Head of the Coordinating Unit of the Raptors MOU.
Тhe key aims of the Egyptian Vulture New LIFE Project are to reduce adult mortality in Egyptian Vultures by addressing the range of threats they face, including on migration; to improve access to safe food in the breeding grounds; and to engage all stakeholders through awareness-raising activities. Deliberate or accidental poisoning, electrocution on power line poles, and collision with energy infrastructure are the main factors that contribute to vulture mortality. The project aims to create large areas which are free of poison and offer sufficient safe food for the birds, in addition to establishing captive breeding and release programmes.
International cooperation is key to saving species with large ranges such as the Egyptian vulture, said Dr. Stoyan Nikolov, Manager of the Egyptian Vulture New LIFE project. “The Coordinating Unit of the CMS Raptors MoU has proved to be extremely effective in building bridges between different countries and continents for the well-being of wildlife and people”. “Since rural populations are directly affecting the wellbeing of Egyptian Vulture populations — through direct persecution and poisoning by farmers at the main migration bottleneck sites and at wintering congregations — the project aims to engage in a meaningful way with these important stakeholders,” said Dr. Nikolov. “We should never forget that solving the problems of the environment goes hand-in-hand with solving the problems of humans,” he said.
The project runs until the end of 2022, however, a number of important milestones have already been achieved. The project has produced anti-poison roadmaps for Greece, North Macedonia and Albania, trained stakeholders on how to prevent mortality of vultures from poison in Bulgaria, and piloted an initiative to insulate electric pylons to protect birds in Albania.
In addition, a number of new aviaries have opened as part of the captive breeding programme, and subsequently, Egyptian Vulture chicks have successfully hatched. Captive-bread chicks have been released, for example in Bulgaria’s Rhodope Mountain. The project also implemented an engaging public awareness campaign at the Sofia marathon, called A Mile for the Egyptian Vulture. The Egyptian Vulture New LIFE Project is a flagship for effective implementation of the Vulture MsAP.  The project is also in the spotlight of the Flight for Survival campaign of BirdLife International.
The Egyptian Vulture New LIFE Project is one of a number of important conservation initiatives in which the Coordinating Unit of the Raptors MOU has played a leading role. Established in 2009, CMS Office – Abu Dhabi comprises the Coordinating Unit of the Raptors MOU, alongside the Secretariat of the Dugong MOU and is hosted by Environment Agency – Abu Dhabi on behalf of the Government of the United Arab Emirates. The vision and long-term support of the UAE, combined with the rich scope of a United Nations forum, is supporting the conservation of raptors, dugong and other migratory species, as well as promoting the well-being of associated human communities, to contribute towards achieving the United Nations Sustainable Development Goals.
Read more about the unique partnership between CMS, EAD and the UAE, the establishment of CMS Office - Abu Dhabi and its achievements over the past decade here.