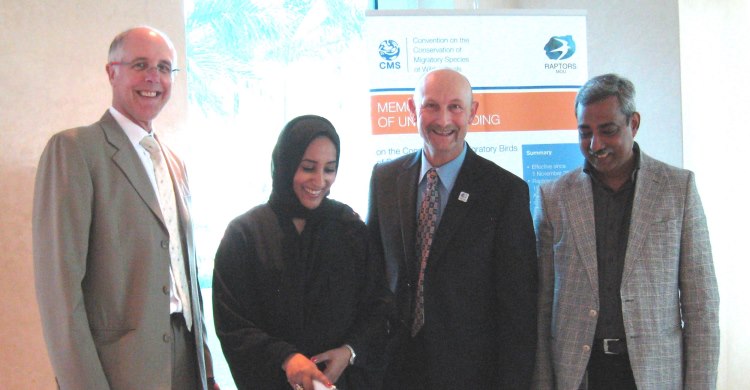 Abu Dhabi, 1 November 2013 - Today the Convention on Migratory Species (CMS) Memorandum of Understanding on the Conservation of Migratory Birds of Prey in Africa and Eurasia (Raptors MOU) turns five years old. The MOU was concluded in Abu Dhabi, where the Coordinating Unit of the Raptors MOU was also established thanks to the generous and ongoing voluntary contribution from the Environment Agency – Abu Dhabi, on behalf of the Government of the United Arab Emirates.

UNEP/CMS Executive Secretary Bradnee Chambers said: “The Raptors MOU is playing a key role in protecting endangered birds of prey on a global scale thanks to the support of the United Arab Emirates and other donors. We urge more countries to join the Raptors MOU to help coordinate international conservation actions for these endangered species.”

On the occasion of the fifth anniversary of the CMS Raptors MOU, which came into effect on 1 November 2008, the Coordinating Unit is proud to highlight the following key achievements:

"The Saker Falcon Task Force is one the many excellent examples of how the Raptors MOU has already proved immensely valuable in offering a mechanism to bring together representatives of governments, NGOs and other stakeholders, to develop conservation solutions to address the many and increasing challenges that threaten migratory raptors," said Nick Williams, Head of the Coordinating Unit of the Raptors MOU.

As the CMS Raptors MOU begins its 6th year of operation, the Coordinating Unit is actively planning enhanced collaboration with Signatories, Range States, Co-operating Partners and other interested parties to conserve migratory birds of prey in the African-Eurasian region.