Flyway Project to Reinforce Egyptian Vulture Populations in the Balkans 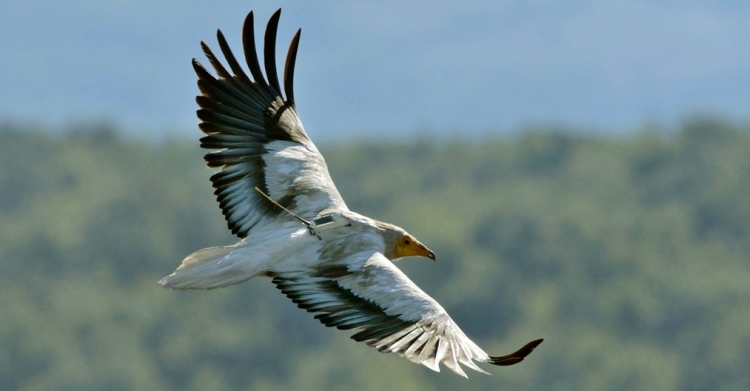 Sofia / Abu Dhabi, 18 December 2017 – Institutions and organizations from 14 countries in the Balkans, Middle East and Africa have come together under a flyway conservation project for the Egyptian Vulture.  The aim to reinforce the easternmost Egyptian Vulture populations in Europe by implementing urgent conservation measures to address major known threats at the breeding grounds and along the flyway.

The Egyptian Vulture is a globally threatened species and over the last 30 years its population in the Balkans has declined by more than 80%.  Less than 70 pairs now remain.  The reasons for this drastic decrease in numbers can be found not only on its breeding grounds on the peninsula, but also along the species’ flyway and in the wintering areas.  Among the four vulture species breeding in the Western Palearctic, the Egyptian Vulture is the only regular long-distant migrant.  Every autumn, individual birds fly over 8,000 km to their wintering grounds in Africa, and return back to the Balkans in the following spring.

The project aims to consolidate and expand upon the previous EU LIFE-funded Project ‘The Return of the Neophron’, which focused upon preventing extinction of the Balkan population of the Egyptian Vulture.  It will drive forward implementation of the ‘Flyway Action Plan for the Conservation of the Balkan and Central Asian Populations of the Egyptian Vulture Neophron percnopterus’ (EVFAP), which was developed with support and guidance from the Coordinating Unit of the CMS Raptors MOU.  The EVFAP is also a key component of the Multi-species Action Plan to Conserve African-Eurasian Vultures (Vulture MsAP).

The full title of the project is ‘Urgent Actions to Strengthen the Balkan Population of the Egyptian Vulture and Secure Its Flyway’ (LIFE16 NAT/BG/000874) and it was soft-launched in July 2017 with 5.85 million EUR of financial support from the LIFE Program of the European Union.  A kick-off meeting took place in October 2017 in Turkey and the project is due to run over a period of 5.5 years, until December 2022.

The Bulgarian Society for the Protection of Birds / BirdLife Bulgaria (BSPB) is the Project Coordinator and, in addition to the Coordinating Unit of the CMS Raptors MOU, partners include the Hellenic Ornithological Society / Birdlife Greece (HOS), WWF Greece, the Royal Society for the Protection of Birds / BirdLife UK (RSPB), Doğa Derneği / BirdLife Turkey (DD), regional offices of BirdLife International in Africa and Middle East, A.P. Leventis Ornithological and Research Institute (APLORI) and Green Balkans.