Description:
Final Report with Draft MoU and Action Plan
The cumulative evidence of national or regional declines of raptors, increasing pressures on their populations, and apparent failings in current conservation measures to redress the situation, led the VI World Conference on Birds of Prey and Owls (Budapest, May 2003) to adopt a resolution proposing the establishment of a new multilateral agreement for the conservation of African-Eurasian migratory raptors, under the auspices of the Bonn Convention on the Conservation of Migratory Species of Wild Animals.
This resolution was taken up by the UK Government’s Department for Environment, Food and Rural Affairs (DEFRA), which suggested to the CMS Scientific Council that a study of the merits of developing a new instrument on raptors should be undertaken in time for the next Conference of Parties to be held in Nairobi, 16-25 November 2005. The suggestion was endorsed, and this report contains the results from the study commissioned by DEFRA and carried out by the NatureBureau.
The overall aim of the study was to “assess whether or not an international agreement to conserve migratory raptors [including owls] should be established under the auspices of the CMS in the African-Eurasian region”. In particular the study should “examine the merits and drawbacks of a CMS agreement in the region and result in a fully reasoned recommendation on whether or not such an agreement should be established.”
Draft MoU text can be found on pages 89 - 93 and draft Action Plan on pages 98 - 100. 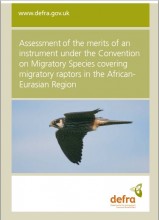