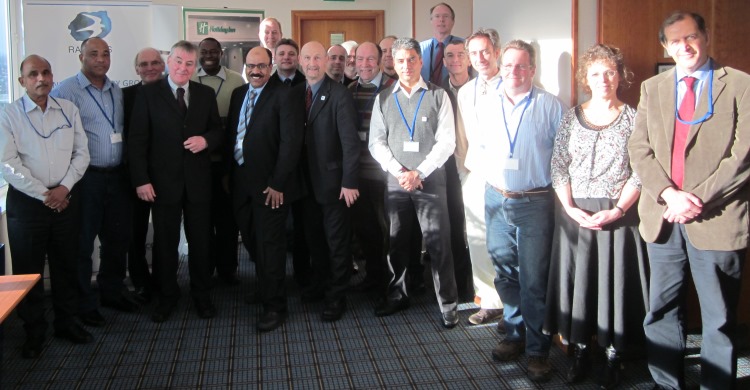 Participants of the 1st Meeting of the Technical Advisory Group of the Raptors MOU. Photo courtesy of Robert Vagg.

Edinburgh, 20 January 2014 - International experts on birds of prey will convene today in Edinburgh, Scotland, to review conservation priorities within the framework of a UN agreement on migratory raptors in Africa and Eurasia. It is the First Meeting of the Technical Advisory Group to the Memorandum of Understanding on the Conservation of Migratory Birds of Prey in Africa and Eurasia (Raptors MOU) and will be held over four days.

Paul Wheelhouse MSP, Minister for Environment and Climate Change, will host an evening Dinner Reception for delegates at the Royal Zoological Society of Scotland. He said: ”It is very encouraging to see such widespread support and interest in the conservation of migratory raptors. Scotland hosts a significant population of raptors, and birds of prey form a vital element of Scotland’s ecosystems. Every year, many thousands of residents and tourists alike enjoy the sight of these majestic creatures. Some raptor species are coping better than others, and there are a number of factors impacting on trends for different species, not least the impact of habitat loss and in some cases illegal raptor persecution or egg theft."

The Group offers an excellent opportunity to work collaboratively to address specific threats, such as electrocution and poisoning, that affect other species of migratory birds, as well as birds of prey. Putting conservation issues within the broader context of the Convention should also promote enhanced collaboration among these key international conservation instruments.

Nick Williams, who leads the Coordinating Unit of the Raptors MOU said: “Many migratory raptors travel huge distances, from here in bonny Scotland all the way to Africa and back, twice a year throughout their lifetimes. This exposes them to a huge range of threats as they journey through so many different countries. The Raptors MOU has a critically important role in bringing together Governments, scientists and other stakeholders to develop comprehensive and internationally agreed solutions to combat these threats and to enhance the conservation status of this spectacular group of birds”.

PRESS RELEASE: International Experts Meet in Edinburgh to Plan the Conservation of Migratory Birds of Prey