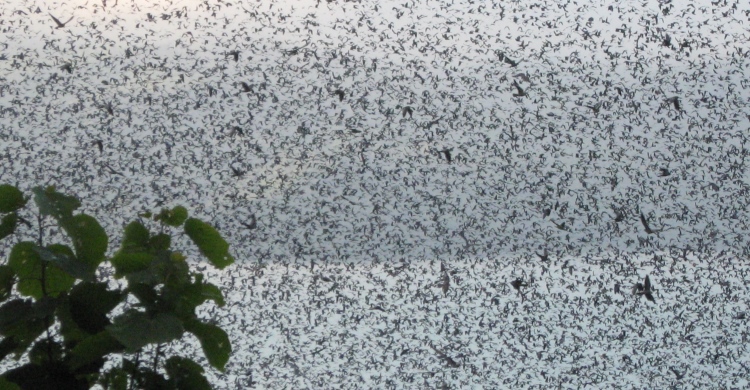 For many decades, Amur Falcons (Falco amurensis) have been known to congregate in Nagaland, northeast India for a short period from mid-October to mid-November each year. The state appears to be a stop-over site during their annual migration from breeding grounds in Russia, China and Mongolia, to wintering areas in Southern Africa. Details have always been sketchy primarily because Nagaland was a closed state, with very few outsiders allowed access.

In recent years, however, some entry permits have been granted and in 2012 a team from a non-Governmental organization (NGO) called Conservation India visited the Wokha region at the critical time. They documented huge concentrations of Amur Falcons roosting in the area. Worryingly though, the local villagers were harvesting large numbers for human consumption, including on a commercial scale with falcons being transported to be sold in markets far beyond the villages located near the roosts.

Conservation India launched a hard-hitting publicity campaign to highlight the harvest which galvanized interest and condemnation from ornithologists and the general public across the world. The Amur Falcon is covered under the Convention on the Conservation of Migratory Species of Wild Animals (CMS) and are also fully protected by national legislation in India. This was illegal harvesting on a scale that appeared wholly unsustainable. The Indian Government acted immediately, in concert with the Nagaland Forest Department. An armed Forest Patrol Force was deployed to visit the area, remove the nets used to trap the falcons and to release any captive birds that were found alive.

Implementation and enforcement of existing protection legislation was effective but typically such human–wildlife conflicts are complex issues that take time to resolve. Naga people are nowadays primarily farmers but their history of hunting wildlife is long and deeply engrained in their culture. It transpired that the villages involved in harvesting the falcons had lost much of their prime agricultural land due to it being completely flooded by the construction of a hydro-electric dam in 2000. They responded by extending ‘slash and burn’ cultivation methods up into the forested slopes above the reservoir and learning to become fisherman. Elephants still roam freely amongst the hills and apparently regularly visit and damage or destroy these hillside crops. And although the reservoir was stocked with fish, the villagers were only able to use nets in the upper few meters of water because the branches of the still standing submerged trees snag them if set at lower levels.

For reasons that are not yet clear, the numbers and concentrations of Amur Falcons in the area appears to have increased significantly in the last ten years, seemingly coinciding with the flooding of the lowland basin to form the reservoir. The Naga people were converted to Christianity during the period last century when India was under the control of the British Empire. So with their prime lands under water, conflict with elephants on the cultivated slopes and limited fishing possibilities, the villagers interpreted the arrival of the enormous flocks of falcons as a kind of compensation from God for their losses. Thus harvesting the birds was carried out on an intense and massive scale to capitalize on the short period during which the falcons were present before continuing their migration.

After the surviving Amur Falcons left the region to resume their journey in late 2012, the Nagaland Forest Department worked actively with the local communities, supported by non-Government Organisations such as Natural Nagas, the Wildlife Trust of India and Nagaland Wildlife and Biodiveristy Conservation Trust. Two young Forest Officers (Hemant Kamdi and Zuthunglo Patton) were given a special assignment to engage with the local Naga people to promote conservation of the falcons. The villagers were apparently shocked when they learnt more about the lifecycle of the falcons, and of their incredible annual journey across the Indian Ocean, through so many other countries and back again. And they were particularly concerned that Nagaland should be viewed so negatively by the outside world. Village leaders agreed to order a halt to any future harvest of the Amur Falcons forthwith. A Memorandum of Understanding was signed between the villages of Pangti, Asha and Sungro and the Nagaland Forest Department to consolidate this.

In September 2013, at the invitation of the Wildlife Institute of India (WII), the Coordinating Unit of the Raptors MoU developed and funded a proposal for a joint mission to Nagaland to coincide with the presence of the Amur Falcons. The main aims were to:

Two specialist ornithologists were recruited from MME (BirdLife Hungary) and the Hungarian Natural History Museum, both with many years of extensive experience studying the closely related Red-footed Falcon (Falco vespertinus). A Senior Scientist from WII, the Head of the Coordinating Unit of the Raptors MoU and the two Nagaland Forest Officers on special assignment comprised the 6-person mission team.

The group met in Nagaland on 3 November 2013 and travelled overland on very rough forest tracks to the area of the Doyang Reservoir in Wokha region. The numbers of falcons found to be present in the area was breathtaking. Repeated sample counting of the falcons as they arrived at the two main roost sites revealed that more than one million individuals were present. This represents the largest single congregation of any species of bird of prey ever recorded anywhere. For 4-6 weeks each year, Nagaland is the falcon capital of the world!

With so many falcons present, one might assume that they would be very easy to catch. However, the birds choose to roost high up in the tree canopies, frequently 10 – 15m above the ground. So after an initial unsuccessful attempt, the team engaged and worked closely with the local fishermen. These men had become experienced trappers in recent years and had developed several unique techniques to capture the falcons. The trapping exercise demonstrated the amazing warmth and friendliness of the Naga people. Even though they were no longer able to trap the falcons for food, they were very willing to work with the international team to capture birds for tagging, ringing and release.

On the second evening of trapping, 30 Amur Falcons were captured in the three mist nets that had been set high up at canopy level, adjacent to a smaller roost site. Three birds were selected to be fitted with state-of-the-art 5g solar powered satellite tags, manufactured by Microwave Technology Ltd. The remaining birds were ringed with both metal and colour rings in the hope that they might be sighted elsewhere in the future. The metal leg-rings were generously provided by the Bombay Natural History Society.

The three satellite tagged falcons were named by Mr T.M. Lotha, Chief Wildlife Warden of the Nagaland Forest Service: ‘Naga’ (short for Nagaland); ‘Wokha’ (the name of the region); and, ‘Pangti’ (the name of the village closest to the largest roost sites).

On 7 November 2013, Naga (an adult male) was released by Mr Lokeswara Rao Madiraju, the Chief Conservator of Forests & Head of Forest Force of Nagaland, Wokha (an adult female) was set free by R. Suresh Kumar (WII) and Nick P. Williams (Raptors MoU) and Pangti (an adult female) was freed by the Chairman and leader of Pangti Village in the presence of many residents, including the fishermen/trappers. It was a moving moment when the Pastor of Pangti village commanded silence and said a short prayer for the safe travels of the falcon and for its return next year.

Following release, all three falcons remained in the area for a couple of days and then two (Pangti and Naga) restarted their migration in earnest, heading southeast over Bangladesh and out across the Bay of Bengal. Full details of the falcons moments can be found at www.satellitetracking.eu.

The key benefits achieved by this project included:

In summary, Amur Falcons received a warm welcome in Nagaland this season with no harvesting taking place. The Naga people ably demonstrated their willingness to change and that they do not fit the negative stereotype in which they were portrayed in some media last year. But they also need support and assistance to enable them to survive and prosper in the absence of access to their traditional fertile lands in the valley, and for refraining from taking the falcons. However, they have proved to be highly flexible and adaptable in the past so there is surely hope that providing alternative sources of income can be developed, the future looks bright for the Amur Falcons and other birds in the region.

Opportunities appear to exist to broaden current farming practices carried out by the Naga people and for small scale eco-tourism. However, the road to Pangti is unstable and unreliable due to regular landslides, particularly during the monsoon season, so some infrastructure investment is certainly required by the Indian authorities.

Nagaland is a magical place with virtually 100% organic agriculture throughout the state so the biomass of insects is likely to be extremely high. Indeed, observations by the multi-national team suggested that the Amur Falcons were feeding predominantly on termites, so a superabundance of this food source may well be the main reason why the falcons are attracted to the region in such high numbers.

Thanks must go to the Indian authorities for acting swiftly and effectively following last year’s revelations, particularly those leading the Nagaland Forest Department and overseeing the Forest Protection Force (Mr. Lokeswara Rao Madiraju, the Chief Conservator of Forests & Head of Forest Force of Nagaland and Mr. T.M. Lotha, Chief Wildlife Warden), with support from two key NGOs – Natural Nagas and the Wildlife Trust of India. The multinational team comprised R. Suresh Kumar (WII), Peter Fehérvári (Hungarian Natural History Museum), Szabolcs Solt (MME/BirdLife Hungary), Hemant Kamdi (Nagaland Forest Service), Zuthunglo Patton (Nagaland Forest Service) and Nick P. Williams (CMS Raptors MoU). Dr V.B. Mathur, Dean of the Faculty of Wildlife Science (WII) played a critical role in securing the necessary permissions for the team to enter Nagaland and Peter Palatitz led negotiations and data analysis on behalf of MME/BirdLife Hungary. Most of all though, the local Naga people deserve our sincere respect. They have surely earned widespread support for recognizing and accepting change in such a positive and selfless manner. This year, Nagaland provided a safe haven for the Amur Falcons to rest and refuel before their long journey to southern Africa – with appropriate support and assistance the Naga people are committed to ensuring that this situation is maintained in the future.

Conservation of Amur Falcon in Nagaland and along its migration route
Nagaland - Falcon Capital of the World
From Prey to Protected Species: How the Tide Turned for the Amur Falcon