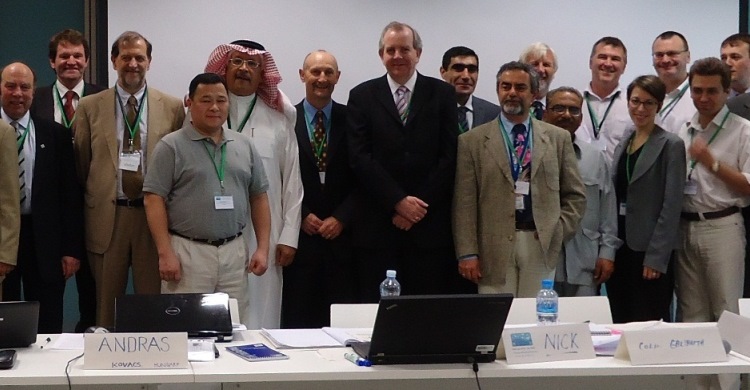 Participants of the 1st Meeting of the Saker Falcon Task Force.

The meeting will be hosted by the Interim Coordinating Unit (ICU) of the UNEP/CMS Memorandum of Understanding on the Conservation of Migratory Birds of Prey in Africa and Eurasia (Raptors MoU). The need for a Saker Falcon Task Force was formally established by the Convention on Migratory Species (CMS) Resolution 10.28, adopted at the 10th Conference of Parties to CMS which was held in Norway in November 2011. The Task Force aims to bring together Range States of the Saker Falcon (Falco cherrug), as well as co-operating Partners and other interested parties, to develop a coordinated Global Action Plan. This will include a management and monitoring system to conserve the Saker Falcon.

The objective of this 1st meeting of the Task Force is to bring together key stakeholders to review and agree its Work Plan for 2012–2014, including adopting an international Single Species Action Plan protocol. Members will be expected to take responsibility for leading and driving forward a range of critical tasks to better understand the threats facing the species, and to identify how best to tackle them.

The Saker Falcon is classified as 'Vulnerable' within the IUCN Red List of Threatened Species. It has a large distribution, with breeding populations located in Eastern Europe, central Asia and as far East as Western China. Many Sakers, particularly juveniles, migrate long distances from their breeding areas, through southern Europe and the Middle East to wintering areas situated in North and East Africa. The Saker Falcon is a skilled hunter, particularly adapted to open terrain such as semi-desert, steppe and grassland habitats, where its favoured prey is rodents; for this reason, it has long been a popular bird with falconers. Historically Sakers were crucial to some Bedouin tribes, who relied on their trained birds to provide meat during winter. Even today the species is sought-after, particularly by Arab falconers.

However, populations of Saker Falcons are now in serious decline for a variety of reasons including illegal capture and trade, electrocution by power grids, loss or degradation of habitat, and poisoning via the use of agricultural pesticides.

The establishment of the Saker Falcon Task Force provides a unique opportunity to successfully promote effective conservation of the species throughout its range. It is anticipated that this meeting will mark an important step towards creating an internationally co-ordinated response to improve the status of the Saker Falcon, including developing robust mechanisms to ensure controlled and sustainable use of the species for falconry purposes, within an adaptive management framework.

Update on 25 July 2012: The meeting report is now available here, together with Annex 5 STF Revised Work Plan, and Annex 6 CMS Resolution 10.28 on the Saker Falcon.