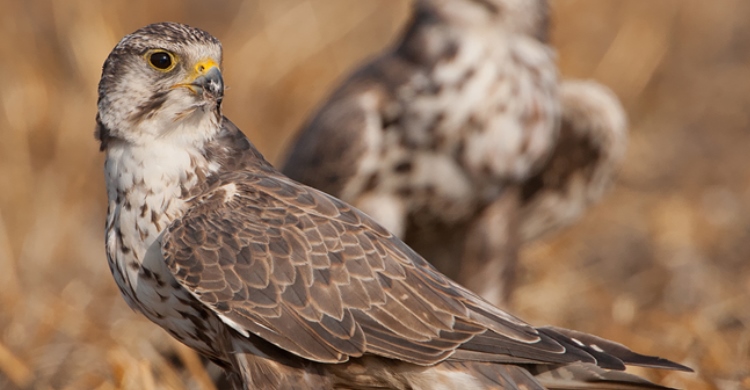 Abu Dhabi, 3 March 2014 – World Wildlife Day is an opportunity to raise awareness of the intrinsic value of wildlife and to the way in which it contributes to the social, economic and cultural aspects of human well-being.  Migratory birds of prey are a critically important part of many ecosystems.  As top-level predators they can act as sentinels to the health of the environment.  In addition, throughout human history certain raptor species have been afforded special cultural significance for many reasons.  For example, the Saker Falcon (Falco cherrug) is considered a heritage icon by rulers and peoples, particularly in the Gulf Region, for its prowess as a hunter in falconry.

On the occasion of World Wildlife Day, the Coordinating Unit of the CMS Memorandum of Understanding on the Conservation of Migratory Birds of Prey in Africa and Eurasia (Raptors MOU) is pleased to announce the publication of a draft Saker Falcon Global Action Plan (SakerGAP), and the commencement of a two month public consultation exercise.  We encourage Range State governments, stakeholders and interested parties to review the SakerGAP and submit comments via email to the CMS Office - Abu Dhabi ([email protected]) by 30 April 2014.

The Raptors MOU extends to 132 Range States and Territories in the African-Eurasian region and covers 76 species of migratory birds of prey, including the Saker Falcon (Falco cherrug). The SakerGAP has been developed by the Saker Falcon Task Force, supported by the Coordinating Unit of the Raptors MOU. It has required over two years of negotiation and collaboration between government representatives, scientists, falconers, conservationists, trappers and other interested parties in the 80 Range States of the species. The Task Force operates with financial support received from the European Union, Kingdom of Saudi Arabia, CITES Secretariat, and Environment Agency - Abu Dhabi on behalf of the Government of the United Arab Emirates.

The Saker Falcon has suffered major population declines over the past 20 years. The number of breeding pairs has reduced by almost 50% during that period. The main causes of the decline include habitat loss and degradation, electrocution by power lines, poisoning, shooting and unregulated trapping and trade for falconry. As a result, the Saker Falcon is classified as globally ‘Endangered’ by IUCN and listed on Appendix I to the Convention on the Conservation of Migratory Species (CMS). It is also afforded protected by other multilateral environmental agreements such as CITES and CBD.

The SakerGAP includes proposals for implementation over a 10-year period that seek to capitalize on existing international collaboration and to translate this into enhanced conservation actions. The aim is to re-establish a healthy and self-sustaining wild Saker Falcon population throughout its range, and to allow sustainable use of the species for falconry purposes, thus also ensuring the future of important cultural traditions and heritage in several countries.

the text in English (pdf)