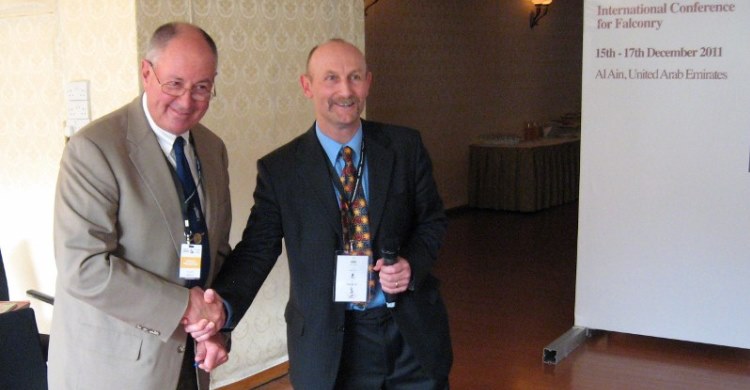 The International Association for Falconry and Conservation of Birds and Prey signed the Raptors MoU in December 2011.

CMS 10th Conference of the Parties (COP10) held in Bergen, Norway 20–25 November 2011 - In addition to meeting and listening to the views of delegates from as many Range States as possible, most of our efforts were focused on supporting the Saker Falcon Working Group that was established to consider the implications of the European Union-led proposal to uplist the species onto CMS Appendix I. The Group met on seven occasions during the week and comprised 38 representatives from Saker Falcon Range States and other interested parties. Highly intensive negotiations held in a positive and constructive atmosphere led to the development of CMS Resolution 10.28 that was unanimously adopted at the plenary session on the final day (click here).

New Signatories to the Raptors MoU – We welcomed the following 8 new Signatories to the Raptors MoU during CMS COP10: Belgium, Denmark, European Union, Germany, Ghana, Italy, Monaco and Romania – click here. In addition, the International Association for Falconry and Conservation of Birds of Prey signed the MoU as a Cooperating Partner on 16 December 2011 during the International Festival of Falconry held at Al Ain here in the UAE. This brings the total to 38 Signatories. We are actively negotiating with three other potential Parties and I hope to be in a position to report additional new Signatories in due course.

Extension to the Donor Agreement – On 15th December 2011 the Environment Agency – Abu Dhabi, on behalf of the Government the United Arab Emirates, signed a three-year extension to the funding agreement for the CMS Office in Abu Dhabi. A significant amount of money will be made available to maintain and staff the office, and to provide support for implementation of the Raptors and Dugongs MoUs. This generous donation provides valuable resources for the Interim Coordinating Unit to drive forward a range of initiatives to support the Raptors MoU.

Saker Falcon Task Force – This important initiative emerged as a result of CMS Resolution 10.28. Its mission is to bring together Range States, Partners and interested parties, to develop a coordinated Global Action Plan, including a management and monitoring system, to conserve the Saker Falcon. The Task Force is being established under the auspices of the Raptors MoU. We developed draft Terms of Reference, circulated these in early January 2012 and invited Expressions of Interest (EoIs) for participation in the Task Force. The response was highly positive and we received far more EoIs from potential participants than could be accommodated in the group. A selection process was conducted and we issued formal invitations in mid-February for the 1stmeeting of the Task Force, which is to be hosted by the ICU in Abu Dhabi on 29th March 2012.

1st Meeting of Signatories (MoS1) to the Raptors MoU – We have been actively working up plans for this important event. We are planning to host the meeting here in Abu Dhabi during the last quarter of 2012. We have just begun visiting potential venues and hope to be in a position to publish the proposed dates for MoS1 very soon.

Guidelines for developing National or Regional Strategies under the Raptors MoU – A draft document was circulated to Signatory States in November 2010 for comment. Nine responses were received. I've now reviewed these Guidelines and am developing plans to revise them to take on board the various comments. The current plan is to circulate the finalized Guidelines to allow at least 6 months for Signatories to develop and submit their Strategies to the ICU in advance of MoS1.

Egyptian Vulture (Neophron percnopterus) Action Plan – According to IUCN criteria, this is the only migratory bird of prey species within the African-Eurasian region classified as 'Endangered', so it's arguably the species to be considered as the highest priority for conservation actions within those covered by the Raptors MoU. Some populations have declined dramatically in recent years and the species appears to be at high risk from various human-induced threats such as poisoning and electrocution by power grids. The Bulgarian Society for the Protection of Birds (BSPB) has recently secured European Union Life Funding to develop a Regional Action Plan covering the Balkan population – click here. We are actively exploring with Bulgarian colleagues the possibility of collaboration between BSPB and the Raptors MoU to substantially extend the coverage of the proposed Action Plan.

Developing synergies and collaborative projects – I have identified a number of other existing projects and initiatives that appear to offer real synergies with the aims and objectives of the Raptors MoU. For example, the GEF-funded Migratory Soaring Birds Project led by BirdLife International, the EURAPMON initiative (Research and monitoring for and with raptors in Europe), the recently established Vulture Specialist Group under the auspices of the IUCN Species Survival Commission and the Working Group to Minimize the Risk of Poisoning to Migratory Birds that is being established following CMS Resolution 10.26 – click here. We will be actively working over the coming months to develop these synergies to realize benefits and efficiencies, and to ultimately enhance the impact of our collaborative raptor conservation efforts.

Sooty Falcon (Falco concolor) Project – The Sooty Falcon is listed in Category I to the Raptors MoU. The species was uplisted by IUCN in 2008 to 'Near Threatened' owing to concerns that its population may be much smaller than previously thought, and in decline – click here. The ICU has begun working with representatives from three counties and two NGOs with the aim of developing a collaborative project to undertake coordinated field research on the Sooty Falcon in both its breeding and wintering areas. Ultimately, this project could be extended to include other countries along the species' flyway from its breeding sites in the Middle East, along the east coast of Africa to wintering areas in SE Africa and on Madagascar.

Publicity and awareness-raising – I have attended a significant number of conferences and events and have given presentations promoting the Raptors MoU at the International Festival of Falconry in UAE (Dec 2011), Birdlife International's headquarters in the United Kingdom (Dec 2011), Asian Raptor Research and Conservation Network (ARRCN) 7th Symposium in South Korea (Jan 2012) and EURAPMON Workshop in Spain (Feb 2012). We are also working closely with colleagues within the CMS Secretariat to contribute to the planned major revision of the CMS website.

This is only the beginning - there is so much to be done to promote and implement the conservation of migratory raptors in the African-Eurasian region.