Public Consultation Exercise: Draft Flyway Action Plan for the Conservation of the Balkan and Central Asian Populations of the Egyptian Vulture (EVFAP) 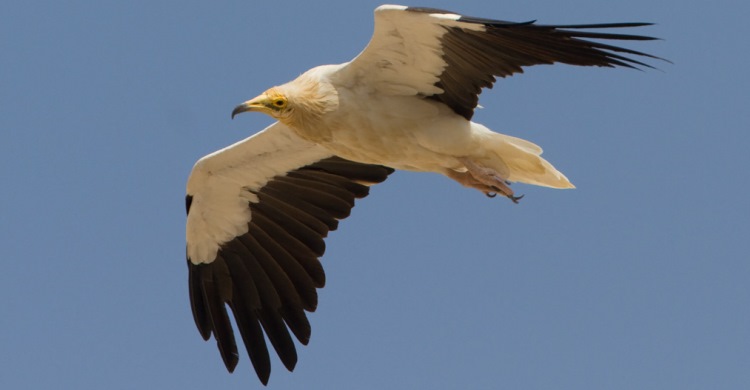 Abu Dhabi, 23 January 2017 - The Coordinating Unit of the Raptors MoU, in collaboration with the EU LIFE+ Project ‘The Return of the Neophron’, has today launched a month-long Public Consultation Exercise on a draft Flyway Action Plan for the Conservation of the Balkan and Central Asian Populations of the Egyptian Vulture (EVFAP).

The draft EVFAP has been developed based on completed questionnaires received from Range States of the species, coupled with the highly constructive inputs of over 70 stakeholders who participated in the EVFAP Planning Workshop held in Sofia, Bulgaria in 2015.  It has been published in three languages - English, French and Russian.  The Consultation period runs until 20 February 2017.

From the outset, those leading the preparation of the EVFAP have adopted a highly collaborative and inclusive approach by reaching out to government officials, conservation organisations, specialists and other stakeholders in all of the Range States within the geographic scope of the plan, which includes the Balkans, Central Asia, Caucasus, Middle East, and Central and Eastern Africa.  The purpose of the Public Consultation Exercise is to reach out even further to enhance the quality of both the content and conclusions contained in the EVFAP.

As well as being published on the internet in three languages, the Coordinating Unit has circulated an email inviting comments from almost 1000 relevant contacts on its mailing list.  The main target groups include: national governmental authorities (i.e. Environment Ministries, Wildlife and Forest Services, etc.), private sector companies (e.g. power and utility companies, infrastructure developers, etc.), conservation organisations, universities, research institutions, consultants, ornithologists and any other individuals with an interest in the conservation of the Egyptian Vulture.

All comments will be reviewed and, where appropriate, integrated into the final version of EVFAP which is due to be completed by the end March 2017.  The EVFAP will form a key component of the Multi-species Action Plan to Conserve African-Eurasian Vultures (Vulture MsAP), which is being developed for presentation at the 12th Meeting of the Conference of the Parties (COP12) to the Convention on Migratory Species (CMS), scheduled to be held in Manila, Philippines, October 2017.

Summary overview of the EVFAP

Egyptian Vultures from the Balkans are long distance migrants wintering in the Sahel zone of Africa.  These annual return journeys can be perilous and there is evidence to show that most mortality occurs along the flyway.  In 2015, in an effort to halt these serious population declines, the EU LIFE+ Project ‘The Return of the Neophron’, in collaboration with the Coordinating Unit of the CMS Raptors MoU, initiated the development of a Flyway Action Plan (EVFAP).  Considering the partial overlap of migration routes, huge knowledge gaps and a strong need for conservation actions to address declines in some of the neighboring populations, the scope of the EVFAP includes populations breeding across the Balkans, Central Asia and Caucasian region, which migrate through the Middle East and winter in Central and Eastern Africa.

The overall long-term goal of the EVFAP is to improve the conservation status of the Egyptian Vulture throughout the flyway, initially aiming at its downlisting to ‘Vulnerable’ on the IUCN Red List of threatened species, and eventually achieving a favourable conservation status of the species across its range.  More specific objectives are to maintain the current population level in the areas with stable numbers of breeding pairs and to reverse negative population trends in those parts of the FAP range where large declines have been reported in recent years.

In July 2015, an Action Planning Workshop was held in Sofia, Bulgaria.  Over 70 researchers, conservationists and representatives of the authorities from 33 Range States attended.  Detailed information was gathered about the regional distribution, status and population trends of Egyptian Vultures by means of a Questionnaire circulated in advance of the workshop.

Earlier in 2015, the Coordinating Unit of the Raptors MoU had commissioned an ‘Implementation Review of the EU Species Action Plan for the Egyptian Vulture (Neophron percnopterus)’.  The overall aim was to better understand the successes, challenges and lessons learned from the EU Species Action Plan adopted in 2008, so as to incorporate this information into the EVFAP.  The contractor, Vulture Conservation Foundation, presented the review results at the EVFAP Workshop in Sofia.

Participants identified the major threats along the flyway as: poisoning, primarily via organic bait laced with toxic chemicals aimed at mammalian carnivores; electrocution and collisions with energy infrastructure; and, direct persecution.  The drivers behind these threats are presented in the EVFAP, alongside a suite of conservation actions to address them.  Additional needs are identified including: long-term research and monitoring; designation of protected areas; building conservation capacity; improving exchange of information; enhanced coordination of NGO-driven initiatives; partnerships with industry (e.g. energy, agriculture); and, improving awareness-raising and publicity.

It is envisaged that the EVFAP will be implemented over a 10-year period and formally reviewed after five years.  It is proposed that an EVFAP Working Group be established to promote and support the implementation of the Plan within each of the Range States.

If you have any questions, please contact Mr. Stoyan Nikolov (BSPB / BirdLife Bulgaria) via e-mail or telephone: +359 878 599 372 (English, French and Russian is spoken).