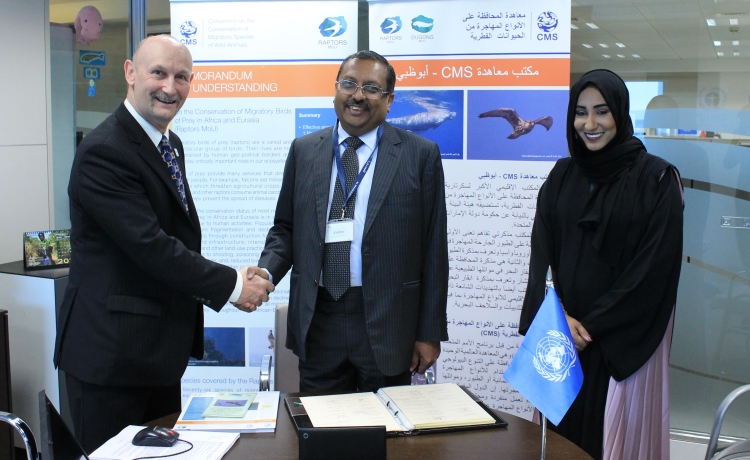 Abu Dhabi, 7 March 2016 – India has signed today the Convention on Migratory Species (CMS) Memorandum of Understanding on the Conservation of Migratory Birds of Prey in Africa and Eurasia (Raptors MoU) raising the number of signatories to 56.

The Raptors MoU was signed by H.E. Mr. T.P. Seetharam, Ambassador of India to the United Arab Emirates, at a signing ceremony held in the CMS Office - Abu Dhabi, attended by Dr. Shaikha Al Dhaheri, Executive Director, Terrestrial & Marine Biodiversity Sector, Environment Agency - Abu Dhabi (EAD) and Dr. Salim Javed, Acting Director, Terrestrial Biodiversity, EAD. The Raptors MoU is supported by a Coordinating Unit, funded and hosted since 2009 by EAD, on behalf of the Government of the United Arab Emirates.

Over fifty species of migratory raptors listed in the Raptors MoU occur in India.  For example, the north-eastern State of Nagaland represents an internationally important stop-over site for at least a million Amur Falcons (Falco amurensis) annually.  These small falcons are long-distance migrants on their way to wintering areas in southern Africa from breeding grounds in China and Russia.  This represents the largest concentration of any species of bird of prey, anywhere in the world.

The Indian Ministry of Environment, Forest and Climate Change already has a track record of taking decisive action to protect migratory birds of prey.   When scientists discovered that the veterinary drug Diclofenac was the primary cause of the Asian Vulture Crisis, the Indian Government banned use of the drug for veterinary purposes in 2006.  It subsequently introduced further restrictions to ban the drug being supplied in large vials intended for human use when evidence became available that these were being prescribed illegally by some vets.  In 2012, when a NGO-led expedition to Nagaland highlighted unsustainable levels of illegal harvesting of Amur Falcons for human consumption, the Government, in cooperation with local authorities, rapidly deployed units of forest guards to enforce the law to protect these birds and also to engage with local people to develop alternative sources of income.

The Raptors MoU will enter into effect in India on 1 April 2016.

The CMS Memorandum of Understanding on the Conservation of Migratory Birds of Prey in Africa and Eurasia (Raptors MoU)covers 93 species of migratory birds of prey and extends to 131 Range States in the African-Eurasian Region.  It has 56 Signatories (55 countries and the European Union) and 3 Cooperating Partners. www.cms.int/raptors

The Convention on the Conservation of Migratory Species of Wild Animals (CMS)aims to conserve terrestrial, aquatic and avian migratory species throughout their range. It is an intergovernmental treaty, concluded under the aegis of the United Nations Environment Programme (UNEP), concerned with the conservation of wildlife and habitats on a global scale. There are now 122 Parties to the Convention, including the European Union. www.cms.int