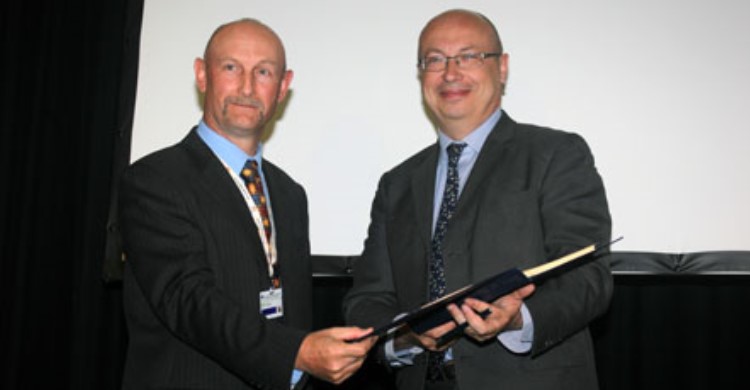 Ambassador Jean-Pierre Thébault (R) signing the Raptors MoU on behalf of the Government of France.

La Rochelle, 15 May 2012– France and the Slovak Republic signed the CMS Memorandum of Understanding on the Conservation of Migratory Birds of Prey in Africa and Eurasia (Raptors MoU). The Signing Ceremonies took place during the 5th Meeting of Parties of the UNEP African-Eurasian Migratory Waterbird Agreement (AEWA), which is being held this week in La Rochelle, France.

The MoU was signed by Ambassador Jean-Pierre Thébault, on behalf of the Government of France on Monday, 14 May. France hosts significant breeding and wintering populations of many of the migratory birds of prey covered by the Raptors MoU, and is also located on a major raptor flyway.

Slovakia became the 40th Signatory of the Raptors MoU on Tuesday, 15 May. Rastislav Rybanič, Director General within the Division of Nature Protection and Landscape Development in the Ministry of Environment, signed on behalf of the Government of the Slovak Republic. Slovakia also holds important breeding populations of many raptors, including threatened species such as the Saker Falcon (Falco cherrug), Red-footed Falcon (Falco vespertinus) and Eastern Imperial Eagle (Aquila heliaca).

Prior to the AEWA meeting, the Interim Coordinating Unit of the Raptors MoU co-organized, with the League for the Protection of Birds (LPO) Aquitaine, a highly successful bird-watching event at la pointe de Grave to celebrate World Migratory Bird Day. A group of over 50 enthusiasts enjoyed a spectacular migration experience witnessing the passage of many tens of thousands of birds, including several hundred migratory raptors.

The Raptors MoU will become effective in both France and Slovakia on 1 June 2012.