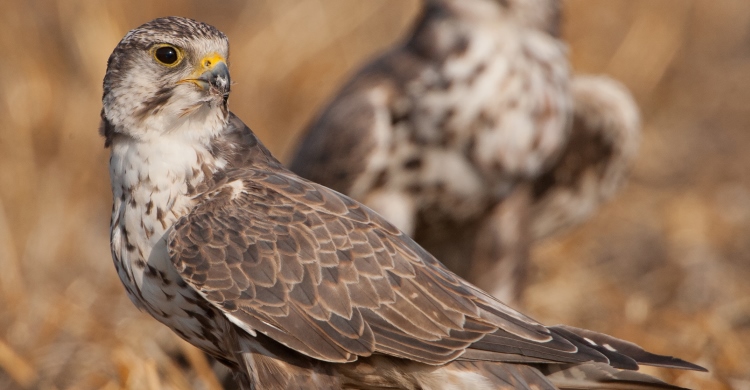 This article has been published in The National Newspaper UAE, on 10 June 2014.

DUBAI // A plan to reverse the dramatic decline of wild saker falcons is to be presented to global scientists next month.

Numbers of the bird, a migratory species found in 80 countries, have been dropping for two decades.

The number of breeding pairs has almost halved, leading the falcon to be classified as endangered by the International Union for the Conservation of Nature.

The breed is important to falconers in the UAE and other Arabian Gulf states.

Loss of habitat, electrocution by power lines, poisoning, shooting and trapping for use in falconry are all factors in their decline.

The draft of the Saker Falcon Global Action Plan, which for the first time raises the issue of sustainable use of wild falcons, has been prepared by the coordinating unit of Raptors MoU, a programme under the Convention on Migratory Species.

The plan was first officially discussed by global experts at a meeting in Abu Dhabi in September last year.

Since then it has undergone two revisions and next month the 200-page document will be presented to the scientific council of the convention.

Raptors MoU, which has its headquarters in Abu Dhabi, is one of 19 targeted programmes under the convention, a legally binding biodiversity treaty between 120 parties.

While the UAE is not a signatory to the convention, it supports Raptors MoU’s coordinating unit, which is hosted by the Environment Agency Abu Dhabi.

Ead supports several other initiatives for the conservation of sharks, marine turtles and dugongs, with the UAE contributing US$7.6 million (Dh27.9m) in aid over the past six years.

The technical experts set to gather next month do not have authority to approve the document, but the meeting is a key preparatory step towards introducing it, said Nick Williams, head of the coordinating unit at Raptors MoU.

“This stage is to let the scientific council have a look at it to demonstrate the robustness of this piece of work,” said Mr Williams.

“Generally, it is very positive to note that all of the states and the main players are on site and supportive of the process.”

If the group reaches consensus next month, the plan could be adopted as soon as November, during a conference of the convention’s parties.

Saker falcons breed in Eastern Europe, Central Asia and Western China, with many migrating long distances through the Middle East for winter in areas of North and East Africa.

“This is effectively a 10-year plan so it is quite ambitious and will require a lot of work from a lot of different stakeholders to address the different threats we are looking at,” said Mr Williams.

“Fundamentally, it is recognising that we all have a single global vision and global mission, which we all want.

“Whichever stakeholder you are, we are all seeking a flourishing population of wild sakers.”

One of the key proposals is sustainable use of falcons, allowing for wild birds to be legally captured for use in falconry.

“We are proposing a mechanism or framework which will allow for sustainable use in some cases,” said Mr Williams.

“Ultimately, this is about maintaining the wild saker falcon population while at the same time retaining the traditional falconry heritage of this country and others in this region.”

Gulf falconers have long been criticised by conservationists for their effects on wild saker populations.

Traditionally, hunters would trap young falcons in autumn and use them for subsistence hunting, eventually releasing them the next spring.

But now falconers can afford to keep the birds all year and send trappers abroad in response to the declining numbers of local wild birds.

Mr Williams said developing a mechanism to use the birds sustainably was also important in curbing illegal trade, which has significant impact on wild populations.

Large numbers of birds die as they are illegally taken across borders. Other problems include the uncontrolled capture of adult birds from breeding populations.

But falconers now realise thriving wild populations are crucial for this part of their heritage, with countries such as the UAE supporting conservation abroad, said Mr Williams.

“There are significant resources in this region at this moment in time, and certain visionaries here in the Gulf recognise that deploying these resources in a very effective way can actually help to provide long-term stability for these populations and retain local cultural traditions.”