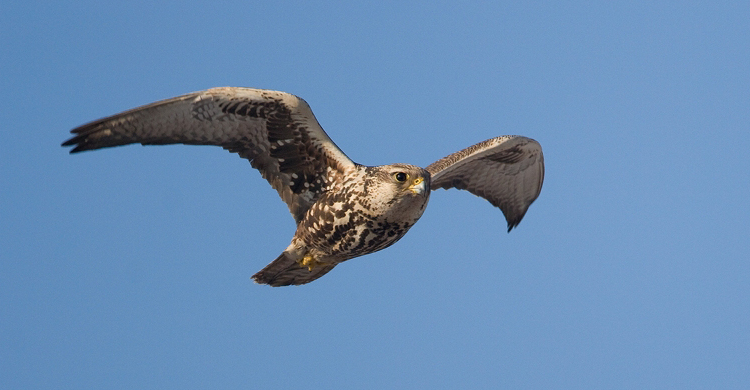 Steps to Stop the Decline of the Saker Falcon

Abu Dhabi, December 2019 - A skillful hunter, the Saker Falcon (Falco cherrug) has been prized for use by humans for centuries. In many countries — and particularly in the Gulf Region — this raptor has traditional, cultural, and economic significance.

Despite the bird’s popularity — and in some places because of it — wild Saker Falcon populations have declined dramatically over the recent years, so much so that the IUCN up-listed the species to globally endangered in 2012. Urgent, coordinated action is required in order to restore the species to a favourable conservation status. In this respect, CMS has provided a valuable framework for the engagement and collaboration of key stakeholders, interested in this spectacular species.
Following adoption of CMS Resolution 9.20, more than 50 experts and government representatives gathered in April 2009 at a Saker Falcon Conservation Workshop, hosted by the United Arab Emirates with support from Environment Agency – Abu Dhabi. Participants agreed that conservation activities should be implemented under the umbrella of the CMS Raptors MOU based at CMS Office – Abu Dhabi.
In November 2011, Parties at CMS COP10 adopted Resolution 10.28, which agreed the listing of the Saker Falcon on CMS Appendix I and included a decision to establish a dedicated Saker Falcon Task Force (STF) under the auspices of the CMS Raptors MOU. The Parties undertook to provide financial and other resources for the operation of the STF and for the implementation of concerted action.
The Saker Falcon Task Force was established in early 2012, bringing together Range States, partners, interested parties and other stakeholders to develop a coordinated Global Action Plan, including a management and monitoring system to conserve the Saker Falcon. The STF comprises over 40 specialists, representing more than 20 countries, and aims to ensure the long-term conservation of wild Saker Falcon populations, while at the same time enabling sustainable use in traditional falconry.
In August 2014, the STF published The Saker Falcon Global Action Plan (SakerGAP), a 208 page-document co-funded by Environment Agency – Abu Dhabi, the Saudi Wildlife Authority, the European Commission, the CITES Secretariat and CMS Parties. The plan applies to the whole geographic range of the Saker Falcon (25 breeding Range States and 59 other countries where the species occurs in winter or on passage), highlighting the conservation priorities across the range and proposing a clear adaptive management framework.
The SakerGAP challenged the accepted view concerning the key threat to the species. It revealed that more than ten times as many birds were being killed every year through electrocution on electric poles, compared to the number of birds trapped for use in falconry. Prior to this, the negative impact of uncontrolled trapping was considered by many to be the most serious threat facing wild Saker Falcon populations.
The SakerGAP is being implemented over a ten-year period (2015 – 2024). It is already reaping positive results through the implementation of its five flagship projects, under which a new Saker Falcon online information portal has been launched, and a network of falconers, trappers and clinics established. The projects also include the successful deployment of satellite tracking, building artificial nest platforms, and installing new bird-safe electricity poles or retrofitting existing ones.
The next step towards achieving the strategic objectives of the SakerGAP is to establish and operationalize a coordination structure to support the development of a mechanism to ensure sustainable use. Effective implementation will depend on financial resources along with the active support and engagement of a wide range of stakeholders such as government agencies, conservationists, falconers and local communities. Expressions of interest are invited to support the implementation of the practical conservation activities outlined in the SakerGAP. Stakeholders should act now. Saving wild Saker Falcon populations will require concerted actions at all levels: international, national, regional and local.
Besides the publication of the SakerGAP, the STF provided an important collaborative framework contributing towards the establishment of an inspirational new foundation for the conservation of raptors. The Sheikh Mohamed Bin Zayed Raptor Conservation Foundation was launched in 2018 with an endowment of US$ 20 million. Its first initiative was the allocation of US$1 million as seed money for a project to tackle the pressing issue of the electrocution of Saker Falcons and other birds of prey by powerline poles in Mongolia.
A number of important conservation initiatives have resulted from the productive and successful collaboration between CMS Office – Abu Dhabi and Environment Agency – Abu Dhabi since 2009 when the Office in the United Arab Emirates was first established. The vision and strong long-term support of Abu Dhabi’s government, combined with the rich scope of a United Nations forum, is supporting the conservation of raptors and other migratory species, and promoting the well-being of associated human communities, to achieve the United Nations Sustainable Development Goals.
Read more about the unique partnership between CMS, EAD and the UAE, the establishment of CMS Office - Abu Dhabi and its achievements over the past decade here.