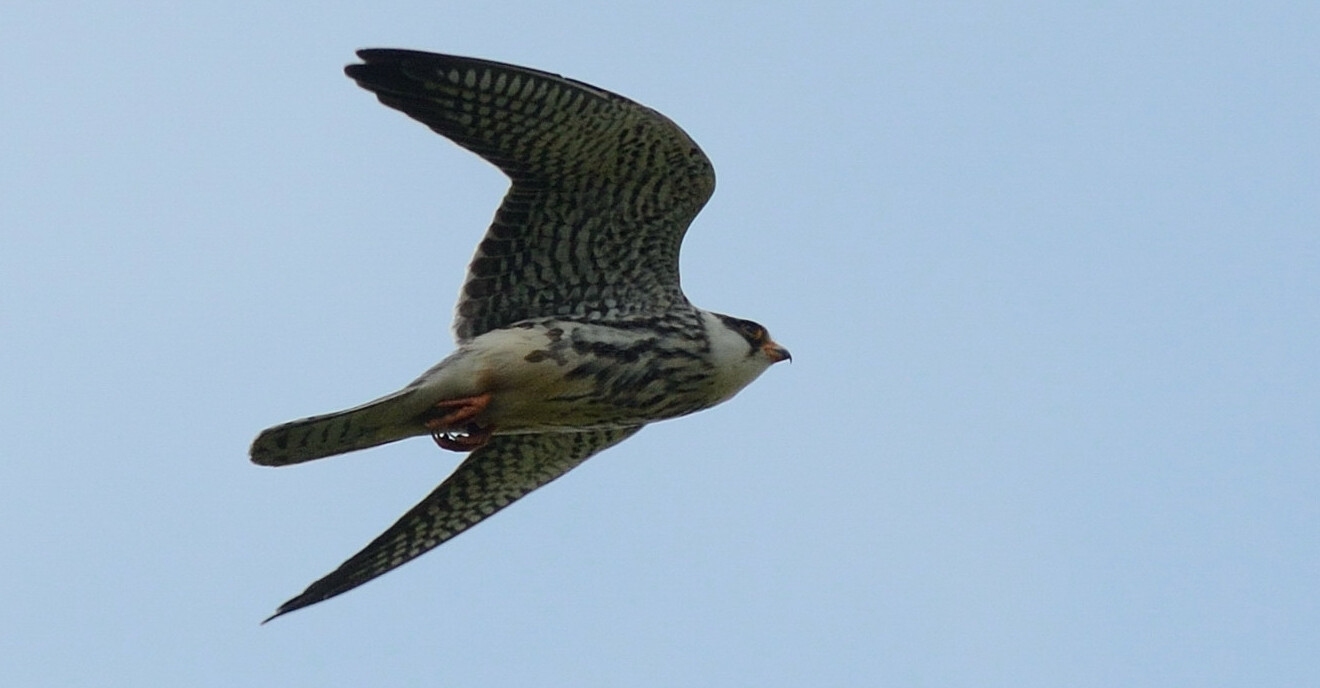 Abu Dhabi, December 2019 - The Amur Falcon is one of nature’s most prolific travelers. The diminutive bird breeds in Siberia and Northern China before travelling more than 11,000 kilometres to winter in Southern Africa. During their journey, many Amur Falcons stop in Nagaland State in Northeast India. They can spend up to a month there every autumn, consuming prodigious amounts of insects to gain the energy necessary for their immense onward journey to Africa.
In 2013, a team from the CMS Memorandum of Understanding on the Conservation of Migratory Birds of Prey in Africa and Eurasia (Raptors MOU) jointly with the Wildlife Institute of India visited the region and witnessed the spectacular sight of one million Amur Falcons entering a night roost — the largest congregation of any species of bird of prey on the planet.
Sadly, while Nagaland was for a few weeks becoming the falcon capital of the world, the Amur Falcon was not safe, despite existing national legislation to protect it. The birds were being hunted for food, while habitat loss was putting further pressure on the populations. In 2012, local conservationists had uncovered evidence of mass slaughter of Amur Falcons by the local population who had earlier lost their prime agricultural land due to dam development. With limited fishing opportunities and wild elephants destroying crops on their new less fertile agricultural lands, the local population used the birds as food and additional income.
The Indian Government reacted swiftly to the news and put measures in place to enforce existing legislation. In addition, a tremendous outpouring of support ensued from national and regional public and non-governmental organisations. This resulted in a concerted community education initiative with public awareness campaigns being held and even a “Save the Amur Falcon” marathon taking place.
To support these conservation efforts, in the autumn of 2013 a six-person specialist team of ornithologists from the Coordinating Unit of the Raptors MOU, Wildlife Institute of India and MME/BirdLife Hungary visited Nagaland, during the annual arrival of Amur Falcons in the state. Hosted by the Nagaland Forest Department, the researchers hoped to reveal new in-sights into the ecology of the Amur Falcon, particularly during its short stay in Nagaland and subsequent traverse across India.
Among other activities, the researchers tagged three falcons so that their movements could be tracked via satellite. A further 27 falcons were fitted with metal leg-rings, which could one day also provide information on the bird’s lives and journeys. Not only did the satellite tagging help scientists better understand the migratory route of Amur Falcons, but they also provided valuable data to support community engagement. The information about the movement of the birds helped the local community visualize and understand that the Amur Falcon population was shared and that capturing the birds in Nagaland deprived other communities in other countries from vital ecosystem services.
“This project is a model for how to combine scientific endeavor with community engagement in order to save a species,” said Nick P. Williams, Head of the Coordinating Unit of the Raptors MOU. “Developing a strong partnership between local NGOs, the Government of India, and the international team, demonstrated the effectiveness of international collaboration, in terms of bridging local and international expertise and building trust with local com-munities,” he said.
Established in 2009, CMS Office – Abu Dhabi comprises the Coordinating Unit of the Raptors MOU, alongside the Secretariat of the Dugong MOU and is hosted by Environment Agency – Abu Dhabi, on behalf of the Government of the United Arab Emirates. The vision and long-term support of the UAE, combined with the rich scope of a United Nations forum, is supporting the conservation of raptors, dugong and other migratory species, as well as promoting the well-being of associated human communities, to con-tribute towards achieving the United Nations Sustainable Development Goals.
Read more about the unique partnership between CMS, EAD and the UAE, the establishment of CMS Office - Abu Dhabi and its achievements over the past decade here.

From Prey to Protected Species: How the Tide Turned for the Amur Falcon
India Signs International Agreement to Conserve Migratory Birds of Prey
Nagaland - Falcon Capital of the World