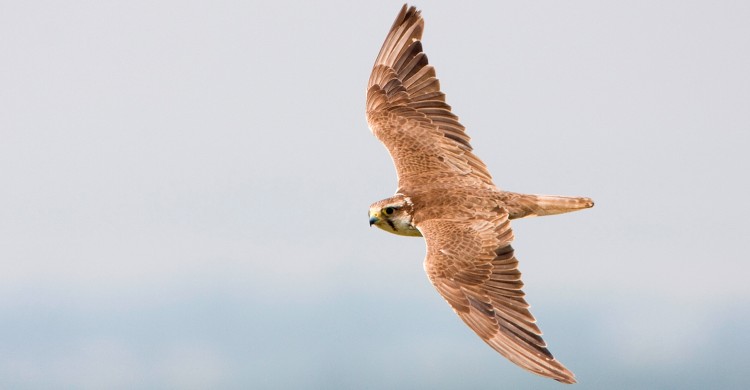 Abu Dhabi 29 July 2021 - Some inspiring news has originated from Bulgaria where new data has shown that a pair of captive-bred Saker Falcons released into the wild have been breeding.

Once widespread across Europe and Asia, the global population of Saker Falcons faced dramatic declines over the past century due to a number of human induced factors such as habitat loss, electrocution from powerlines, poisoning from pesticides and poaching. Being classified as ‘Endangered’ by IUCN Red List, the Saker Falcon is listed on Appendix I of the Convention on Migratory Species (CMS) as a species threatened with extinction and therefore requiring strict protection.

The Green Balkans Wildlife Rehabilitation and Breeding Centre, based in central Bulgaria, has been addressing the long-term decline in Saker Falcon populations with a breeding and reintroduction programme. Sakers have been imported from other European countries and the chicks produced by the captive breeding pairs are released through the use of hack cages that are installed high in oak trees to allow young birds to grow accustomed to their environment. Between 2015-2020, Green Balkans released 80 Saker Falcons into the wild. The birds are fitted with identification rings and one pair was observed breeding in 2018 and 2019. The research team found that the female of the pair had been replaced by another female, also from the breeding programme and the new pair produced chicks in 2020.

In Bulgaria, Sakers were considered extinct as a breeding species as the last pair bred in 2006. But now, the reintroduction programme led by Green Balkans is aiming to restore populations of this iconic species. The breeding programme will continue for another five years, and the team aims to release 100 birds and have six breeding pairs in the wild by 2024, the start of a self-sustaining population in Bulgaria.

To address the wider threats to the species, the Bulgarian Society for the Protection of Birds (BSPB) is restoring 640 hectares of grassland habitats for the birds and has insulated more than 4.600 powerlines across Bulgaria, to reduce the number of electrocution related deaths.

Addressing these key threats to the species are important steps in the implementation of the Saker Falcon Global Action Plan (SakerGAP). Published in 2014, the action plan was a result of collaboration between range states, signatories and experts and provides a roadmap of conservation priorities across the range with the aim of re-establishing a healthy and self-sustaining wild Saker Falcon population.

The Coordinating Unit of the Raptors MOU commends the successful work being undertaken in Bulgaria that is contributing to positive conservation efforts for the Saker Falcon.