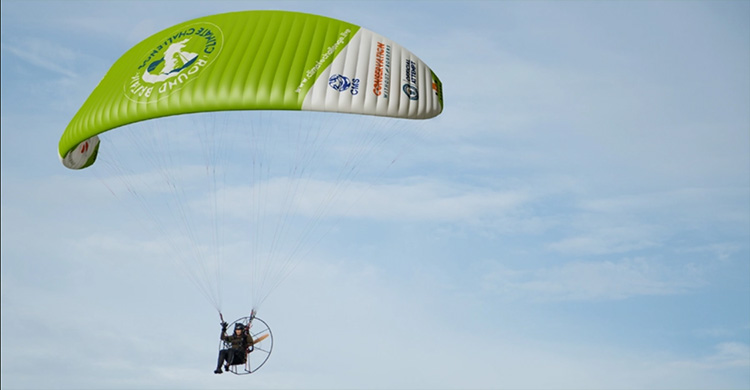 Bonn, 22 June 2021 - Ambassador for the UN’s Convention on the Conservation of Migratory Species of Wild Animals (CMS), Sacha Dench has taken off on the Round Britain Climate Challenge – a groundbreaking expedition to circumnavigate mainland Britain in an electric paramotor.

Sacha Dench is making the 3,000-mile journey to mark the 26th UN Climate Change Conference of the Parties (COP26) taking place in Glasgow later this year.

Launched from Glasgow, Scotland, the expedition will see Sacha flying anti-clockwise around the coast of Britain for 6 weeks. She will land at various sites and talk with communities about how climate change is affecting their local nature and available innovative solutions. The stories and videos from each day will be posted on an interactive map where the public can follow her journey.

The courageous expedition aims to involve the public in tackling the climate crisis in the run up to COP26. A compilation of the stories gathered along the expedition will be presented at the climate negotiations.

The Australian adventurer is famous for undertaking global expeditions with migratory birds, most notably her “Flight of the Swans” that raised awareness of the plight of the Bewick’s Swan and other migratory birds protected by CMS and the African Eurasian Waterbirds Agreement (AEWA). After losing her home to bushfires in Australia last year, she broadened her focus to include the climate crisis.

Climate change directly affects migratory species, with one of the most immediate threats being the loss of vital habitats such as wetlands. Climate change is also causing the collapse of food webs in the oceans and in coastal areas, which has impacts not only on marine life, but also reduces food availability for migrating sea birds and water birds.

When in flight, Sacha will not only experience incredible views, but she will also see landscapes and migratory animals in their natural habitats.

Several bird species that are listed also under the CMS Memorandum of Understanding on the Conservation of Migratory Birds of Prey in Africa and Eurasia (CMS Raptors MOU) will garner attention during the expedition. The Red Kite, Golden Eagle, White-tailed Sea Eagle and Marsh Harrier face habitat loss and degradation, lead poisoning and collision with windfarms and powerlines.

Conserving and restoring ecosystems and the corridors that link them is important to ensure the long-term survival of wild animals during their migrations. The conservation of migratory species and their habitats promotes ecological connectivity, and as they travel on their journeys migratory species help us to visualize this connectivity. They are living threads that connect ecosystems, countries and cultures.

The concept of ecological connectivity – the unimpeded movement of species and the flow of natural processes that sustain life on Earth – was endorsed by the 13th Conference of the Parties as one of the top priorities for CMS.

With the Round Britain Climate Challenge, Sacha aims to set a new Guinness World Record for the first and fastest circumnavigation of mainland Britain with an electric paramotor.

She said: “Along with testing the capability of electric flight and challenging what we think is possible, I want to capture the imaginations of the young and old, rural and urban, and focus on answers to the climate crisis – not problems - and encourage everyone, to get involved. We’re trying to answer the question Britain drove the Industrial Revolution, can we drive the Green Revolution too?

As well as investigating how climate change is affecting different regions of the country, we will be showing – in a visually stunning and exciting way - what is happing to help cut carbon and preserve and restore our environment. We’ll be finding the likely and unlikely heroes and discovering where and what works.”