While many studies examine the impact plastic pollution poses to marine wildlife, the impacts on freshwater species are much less well studied. The report, therefore, provides an important tool to assess potential risks on such species that can be used globally.

In the Asia-Pacific region discarded fishing gear is a particular threat to the 23 species studied in both rivers. The report – prepared by the Commonwealth Scientific and Industrial Research Organization (CSIRO) for CMS – concludes with recommendations to address this global threat from plastic pollution.

This report is the result of a collaboration between CMS and the UN Environment Programme as part of the Japan-funded CounterMEASURE II project to identify sources and pathways of plastic pollution in river systems in Asia. 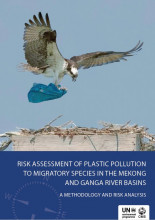