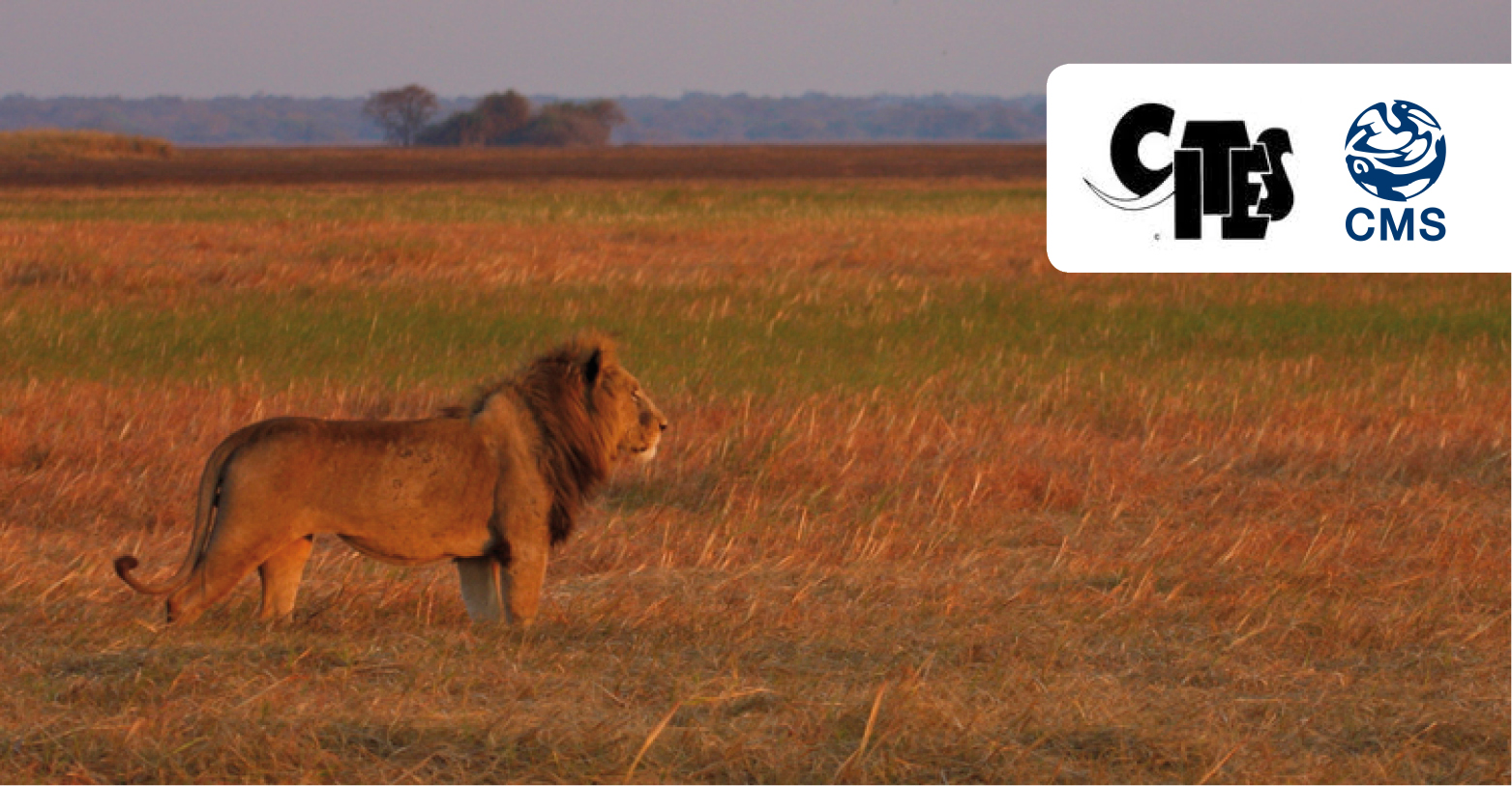 Entebbe, Uganda, 1 June 2016 – In a historic move, representatives of 28 African lion Range States have reached broad agreement to secure the survival of this iconic species in the wild across Africa.

The continent-wide consensus on the conservation, management and restoration of the lion (Panthera leo) and its habitat in Africa was reached at a meeting hosted by the Ugandan Government and jointly convened by the Convention on International Trade in Endangered Species of Wild Fauna and Flora (CITES) and the Convention on the Conservation of Migratory Species of Wild Animals (CMS) from 30 to 31 May in Entebbe.

According to the 2015 IUCN Red List, African lion populations have experienced an overall decline of 43 per cent between 1993 and 2014. While populations increased in Botswana, Namibia, South Africa and Zimbabwe by 12 per cent over the same period thanks to good wildlife management, other sub-populations in the rest of Africa have plummeted by 60 per cent.

"We are proud to have been able to host this important CMS and CITES-led meeting for the African lion and are pleased about its outcome. The actions agreed in Entebbe are important steps in the right direction and Uganda is ready to cooperate with other Range States to promote and enhance lion conservation efforts across Africa”
H.E. Maria Mutagamba, Ugandan Minister of Tourism, Wildlife and Antiquities.

The final communiqué agreed at the two-day inter-governmental meeting, shows consensus among African lion Range States on the importance of conserving lions across the continent and identifies a number of practical actions.  The commuiniqué is also available in French.

These include: involving local communities in conservation activities and benefit-sharing, mitigating human-lion conflicts, and retaliation killing or poisoning by cattle herders and pastoralists, improving protected area management to benefit lions and restoring connectivity between fragmented lion populations. Countries also agreed on the need to investigate further the illegal trade in lion bones and other parts, the introduction of wildlife and ecosystem-based land-use practices and the need to step up transboundary collaboration to address the plight of African lions.

“African lion Range States share a common objective to ensure the survival of lions in the wild. There is agreement on the threats and, with a few exceptions, the way forward. CITES and CMS are delighted to offer their support to Range States to achieve their objective, with robust scientific support coming from IUCN”,
John E. Scanlon, Secretary-General of CITES.

A carefully crafted consensus on the topic of trophy hunting was also agreed in Entebbe, with all lion Range States present accepting that trophy hunting of lions, if well managed, is a good conservation tool that should not be jeopardized by CITES or CMS. In the communiqué, the 28 Range States “Highlight the benefits that trophy hunting, where it is based on scientifically established quotas, taking into account the social position, age and sex of an animal, have, in some countries, contributed to the conservation of lion populations”.

Habitat loss and degradation is the predominant threat to lions in Africa, triggered by human settlements encroaching into lion habitat. Prey depletion as a result of poaching for bushmeat, and indiscriminate killing and livestock are other major causes of decline. Furthermore, there are concerns about the illegal trade in lion parts for medicinal purposes, and improvements in the management of trophy hunting have been recommended.

"The sharp declines in lion populations over the last decade mean there is clearly an urgent need to address the pressures affecting this majestic species. Strengthening the coordination and collaboration amongst the lion countries in Africa through workshops such as the one convened by CMS and CITES in Entebbe is key to reaching this goal,"
Bradnee Chambers, Executive Secretary of CMS.

Both CMS and CITES are guided by their respective mandates to address threats to the African lion.

At the next CITES Conference of the Parties (COP17) to be held later this year in South Africa, a proposal will be discussed for higher protection by transferring the African lion from Appendix II to Appendix I. Furthermore, various aspects of the trade in and management of lions will be discussed at COP17, including guidance for sustained trophy hunting and enforcement.

CMS for its part is implementing a decision taken at COP11 to promote lion conservation across Africa and pave the way for a listing on Appendix II of CMS at COP12, which will take place 22-28 October 2017 in Manila.

"The meeting in Entebbe has been remarkably constructive, and has helped for the first time to bring together African lion Range States to deliberate on the plight of the species. It has demonstrated how a combination of local and regional efforts as well as regulation of international trade by CITES and enhanced cooperation through CMS can promote the conservation of the species and its habitats. African lion Range States call upon CITES, CMS and other partners to support their efforts to conserve and restore this iconic species across the continent,”
Mr. George Owoyesigire, Ag. Asst. Commissioner for Wildlife Conservation at the Ugandan Ministry of Tourism, Wildlife and Antiquities, who chaired the meeting held in Entebbe.

The meeting in Entebbe was made possible thanks to financial support from the Governments of Germany, the Netherlands and the United Kingdom of Great Britain and Northern Ireland. It was also the first time that CITES and CMS have jointly convened such a meeting.

With 182 Parties, the Convention on International Trade in Endangered Species of Wild Fauna and Flora (CITES) is now one of the world's most powerful tools for wildlife conservation through the regulation of international trade. Thousands of species of wild animals and plants are internationally traded and used by people in their daily lives for food, health care, housing, souvenirs, leisure, cosmetics, clothing or fashion.

The Convention on the Conservation of Migratory Species of Wild Animals aims to conserve terrestrial, aquatic and avian migratory species throughout their range. It is an intergovernmental treaty, concerned with the conservation of wildlife and habitats on a global scale. Since the Convention's entry into force in 1979, its membership has grown steadily to include 123 Parties from Africa, Central and South America, Asia, Europe and Oceania.