The Network of Sites of Importance for Marine Turtles in the Indian Ocean – South-East Asia Region was formally adopted by the Signatory States to the IOSEA Marine Turtle MoU at their Sixth Meeting, held in Bangkok in January 2012. An accompanying Guidance document describes the background, purpose and benefits of the Site Network; the site nomination and evaluation process; various network financing options; the roles of different actors; and next steps required to operationalise the network.

The overarching goal of the IOSEA Marine Turtle Site Network is to promote the long-term conservation of sites of regional and global importance to marine turtles and their habitats. The network serves as a mechanism for sites to operate more cooperatively and synergistically, both ecologically and administratively, rather than working in isolation with minimal coordination. The use of robust criteria to evaluate sites nominated for inclusion in the network aims to prioritise the most critical sites needed to secure the future of marine turtle species/management units.

The expected benefits of the region-wide site network include:

Countries are invited to nominate turtle nesting beaches and adjacent areas considered to be important sites for marine turtles and, in doing so, will hopefully have an added incentive to secure additional resources and protection at the sites. However, provision of additional resources is not a binding commitment or obligation upon joining the network.

Detailed information on the rationale for the site network proposal, the process for nominating and evaluating candidate sites, and alternative approaches for coordinated governance of sites included in the network is presented in the annex to the resolution that formally established the Site Network.

The Site Network is populated with sites nominated by Signatory States, and formally accepted for inclusion in the network by the Meeting of IOSEA Signatory States, based on a recommendation of the IOSEA Advisory Committee. A complementary, parallel process has been initiated to draw up a “master list” of priority candidate sites to help guide Signatory States in their site nomination considerations.

An attractive two-page A3-size handout gives background information on the IOSEA Marine Turtle Site Network and summarises its current activities. The format allows for regular updating so that the information is as current as possible.

The 'Guidance Paper' for the IOSEA Marine Turtle Site Network notes that: "A complementary, parallel process is envisaged whereby a master list of priority candidate sites will be drawn up to help guide Signatory States in their site nomination considerations". 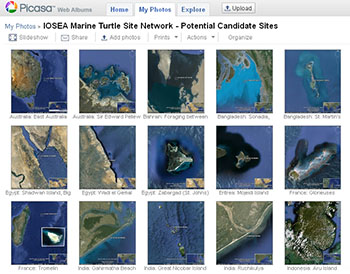 The depiction of these suggested sites or areas does not imply any endorsement or undertaking by the countries concerned to formally nominate them for inclusion in the Network; though there is a good possibility that this will eventually happen for many of the sites.

Additionally, the Secretariat has begun to compile Site Information Sheets for several of the suggested sites – including, among others: Itsamia (Comoros) St. Martin’s Island (Bangladesh), St. Brandon (Mauritius), Ponto do Ouro (Mozambique), Thameehla Island (Myanmar), Sir Bu Nair (United Arab Emirates), and Socotra (Yemen). The idea is to demonstrate what information is already available for a selection of sites, while drawing attention to details that would still be required in order to prepare a complete submission. These provisional data sheets will be circulated to the countries concerned and added to the website in due course.

As many as possible of the suggested sites will be assessed using the agreed Evaluation Criteria to determine whether or not they would qualify for inclusion in the Network if they were to be formally nominated by a Signatory State.