Still Swimming with Turtles: Tourist-Turtle Interactions in the Maldives Pre- and Post-COVID-19

Over one million visitors came to the Maldives in 2018, many of which joined in-water activities such as snorkeling and diving to see marine megafauna such as whale sharks, manta rays and sea turtles (e.g., MUI 2022).

With programmes from 20 countries, on 16 and 19 June 2021 the IOSEA region celebrated World Sea Turtle Day, the 20th Anniversary of the IOSEA Marine Turtle MOU and the fascinating world of marine t 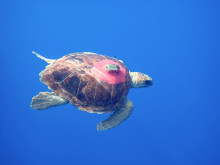 The Atmosphere and Cyclones Laboratory and Kelonia have equipped 11 juvenile sea turtles (8 Loggerhead Turtles and 3 Olive Ridley Turtles) with Argos tags equipped with additional sensors. These juveniles had been taken in at the Kelonia Care Centre after being accidentally caught by longline fishermen in Reunion Island waters.

Cousine Island is a small granitic island (25.7 ha) within the Republic of Seychelles containing a singular beach on its eastern, windward side. It is situated five kilometres from the second most populated island in the Seychelles, Praslin, and only two kilometres from the neighbouring island of Cousin (a nature reserve managed by Nature Seychelles since 1998). Since the purchase of Cousine Island by the current owner in 1991, conservation activities to monitor the nesting hawksbill females on the beach have been implemented as well as efforts to improve hatching success rates and the number of hatchlings released to sea.

Caring for an endangered visitor

Mauritius oil spill likely to be cleaned up by January, ship owner says

The clean-up of a