Turtle Excluder Device as a sustainable fishing practice in Malaysia 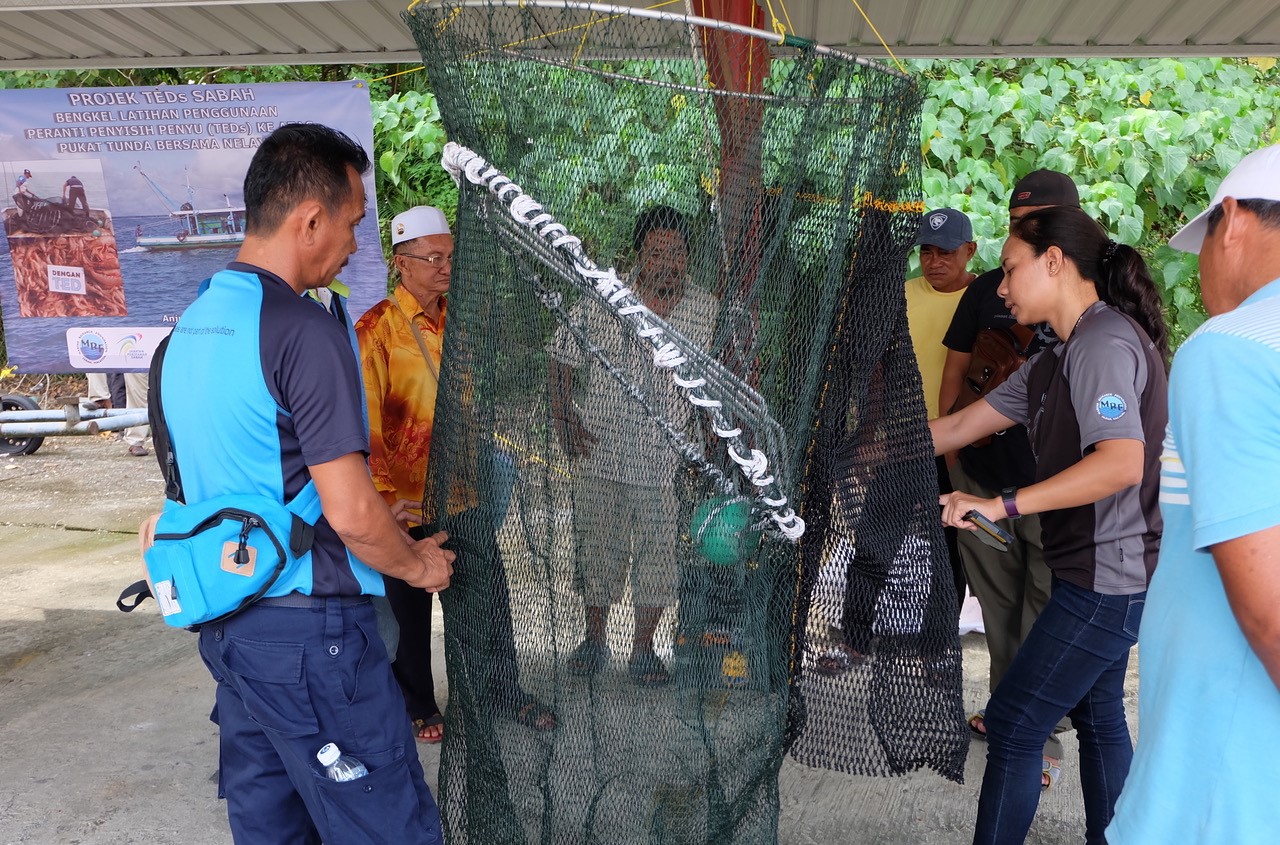 Malaysia’s fishing industry is dominated by trawl fisheries, contributing almost 50% of overall fish landings. This contributes to a high mortality rate of sea turtles accidentally caught in these fishing nets, especially by shrimp trawl fleets – as turtles and shrimps happen to share the same habitats. Every year, thousands of sea turtles get trapped in fishing nets and eventually drown, as they are unable to reach the surface to breath. One of the many ways to prevent the accidental catch or bycatch is by fitting nets with a simple device that helps sea turtles to escape through an escape route, called a Turtle Excluder Devices (TEDs). The use of TEDs offers practical low-cost solutions to reduce the loss of endangered sea turtles, to preserve our marine environment and to sustain the livelihoods of the local fishing communities and our fisheries.

TEDs were first introduced in Malaysia in 2007 as an NGO-led project initiated by the Marine Research Foundation (MRF), a local non-profit agency based in Sabah, Malaysia. After a successful chain of events, TEDs became a full-scale National programme in 2013 under the Department of Fisheries Malaysia (DOFM), and have subsequently became a legal requirement in four states in Malaysia (Kelantan, Terengganu, Pahang, & Johor) since 2017. Malaysia is currently TED-certified under the U.S. Certification Section 609 from the US State Department with a certified Malaysia TED design under its belt, and the use of TEDs in Malaysia’s commercial trawl fleets allow the export of shrimp products to the US from the four states currently certified. To maintain the certification of these four TED-compliant states, as the Technical Advisor to the programme, MRF continues work alongside DOFM to support fishers and get them ready for each monsoon shrimp season and participates in the annual inspections for re-certification. Refresher courses are held during the pre-season for TED-compliant vessels of the four States by assisting fishers and net makers in working out any problems faced with the use of TEDs and ensuring the TEDs meet the standards set by the US TED certification programme.

For a nation-wide adoption of TEDs, MRF has expanded to other States in Malaysia, starting with Sabah. The State of Sabah is as large as the four TED-certified States combined and has the highest number of shrimp trawl fleets in Malaysia, therefore much attention was needed for a greater uptake of TEDs. In 2018, with support from the Department of Fisheries Sabah, MRF embarked on a State-wide TED programme across the key fishing districts in Sabah. Close to 300 fishers and net makers were trained to install, repair, modify and adapt TEDs to local fishing vessels and approached to build trust and buy-in to use TEDs in their fishing operations. Fishers participated in community dialogue sessions to provide feedback and concerns on the development of TEDs and participated in at-sea demonstration trials to observe the TED performance and learn of its benefits. These include reducing bycatch, improving fuel efficiency and improving catch quality. Evidence-based systems were developed and deployed during trials whereby underwater cameras were attached behind the TEDs to provide valuable information to fishers on the TEDs operation underwater, and fuel meters were used to track fuel savings. MRF also developed capacity within the Department of Fisheries Sabah and assembled a team of ‘TED All Stars’ to further champion and advocate for TEDs implementation across Sabah.

All that remains is to continue to provide the requisite knowledge and skills to fishers, net makers and fisheries officers in the remaining States, further expanding the TEDs implementation nation-wide.  We believe, together with the government and fishing communities, TED adoption will safeguard Malaysia’s sea turtles’ populations as well as fisheries sustainability, while preserving fisher livelihoods.

IOSEA E-Newsletter May 2021
Turtles and other Marine Megafauna Bycatch in Artisanal Fisheries in the Saudi waters of the Arabian Gulf.
SWOT Threat Series #1: Fisheries Bycatch