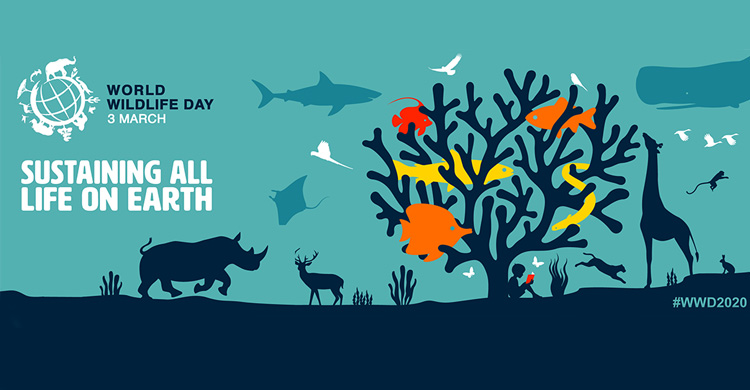 Bonn, 3 March 2020 – “Sustaining all life on Earth” is the theme of this year’s World Wildlife Day (WWD) reflecting the importance of the sustainable use of natural resources as well as highlighting wild animal and plant species as key components of the world’s biodiversity. The theme also aligns with the United Nations Sustainable Development Goals, especially the goals addressing life below water, life on land, eradicating poverty and ensuring sustainable consumption and production patterns.

With 2020 being the “super year” for nature, so called because of the series of important meetings being held over the coming months to help shape the post-2020 Global Biodiversity Framework, the WWD theme recognizes the importance of wild animal and plant species as important components of biodiversity.  Animals and plants area are also the basis for many human livelihoods, in particular for those people that live close to nature. Special attention is being given to some of the planet’s most biodiverse and threatened habitats, namely coral reefs, sometimes referred to as ‘the rain forests of the sea’.

Coral reefs are important habitats for a number of CMS-listed species, notably marine turtles, sharks and Dugongs.  Six of the world’s seven species of marine turtle, including the Green Turtle, the Hawksbill Turtle and the Loggerhead Turtle, are found in Australia’s Great Barrier Reef, with major nesting areas located in its northern and southern extremities.  Sharks and coral reefs are dependent on each other, with the reefs providing the sharks with prey, nurseries and protection, while in return the sharks provide services such as recycling nutrients and removing invasive species and diseased fish.  Dugongs are found in shallow coastal waters across the tropical Indo-Pacific region, and the Great Barrier Reef supports one of the world’s largest Dugong populations.  The presence of Dugongs was among the grounds for granting World Heritage status to the Great Barrier Reef.

More information about World Wildlife Day can be found on the CITES website. A more detailed explanation of the theme, “Sustaining all life on Earth” and an outline of some of the key activities being planned for the commemorative day were set out in a Press Release issued by the CITES Secretariat at the end of last year.

On 20 December 2013, the 68th session of the United Nations General Assembly proclaimed 3 March as World Wildlife Day to celebrate and raise awareness of the world’s wild fauna and flora. The date is the anniversary of the signature of CITES in 1973. World Wildlife Day has become one of the most prominent global annual events dedicated to wildlife reminding us of the urgent need to step up the fight against wildlife crime, which has wide-ranging economic, environmental and social impacts, and to raise awareness of the various challenges faced by endangered species, including migratory ones.