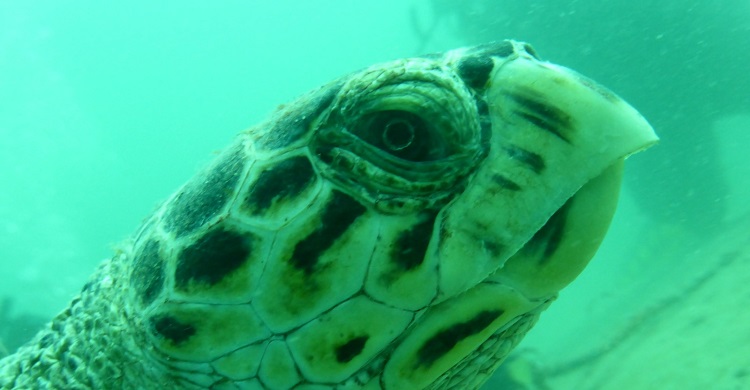 Qatar is a peninsula situated in the middle of the Persian Gulf. It extends 160km from the coast of the Arabian peninsula. There are two currents that run along the northern and southern shore of the Gulf. Many migratory species drift with the Gulf current moving from the Strait of Hormus along the shores of Iran, Iraq, Kuwait, Saudi Arabia, Bahrain and Qatar then into UAE waters. The current deposits sand along the north-east coast of Qatar. Sea turtles feed and nest in these areas.

Hawksbill Turtles nest along approximately 50 km of the north-east coast from Umm Tais to Ras Laffan, as well as on the sandy beaches of the eastern offshore islands (Qatar Turtle Management Project 2013).

A study done in 2013-2015 (Pilcher et al 2015) revealed that there are more green turtle than other species at sea at a ratio of 7:3. Qatar is home to a resident population of small juvenile Green Turtles (<40cm curved carapace length CCL) and a transient population of juvenile Hawksbills (<25cm CCL). There were more male Hawksbills than female (4M:1F), but there were more female Green Turtles than male (2M:3F). This might indicate that Hawksbill nests are hatched at higher temperatures than those of Green Turtles. The average number of eggs in hawksbill nests is 78 (range 46-104), the eggs weigh on average 28g (28.1-28.8), hatching weight is on average 13g (10.8-14.4). Hatching success was found to be at 86%.

A study at turtles at Ras Laffan Industrial City reported 241 nest around the Ras Laffan area in 2002.(Tayab & Quiton 2003).

In 2021 the Ministry of Environment and Qatar University researchers transferred 92 nests from other beaches to the protected Fuwairit beach. They also released 53 hatchlings to the sea after collecting data. Nest numbers range from 100 to 200 a year. Post-nesting Hawksbill Turtles have been found to travel up to 100km away from the nesting site to forage, but mostly stay within 50km.

Threats to sea turtles in Qatar are:

1. Loss of eggs and hatchlings due to poaching, foxes, cats and birds.

2. Loss of nesting beaches due to coastal development, reclamation, and sand removal resulting from coastal erosion due to climate change.

3. Entanglement in fishing gear and drowning.

4. Pollution from oil spills and plastic, ingestion of which cause inability to absorb nutrients from stomach.

The government of Qatar through the Ministry of Environment and Climate Change is taking actions to improve protection of is marine resources including sea turtles within in its territorial water. The State of Qatar will be more proactive in supporting regional activities on sustainability of marine biodiversity. We encourage collaboration within the Gulf countries related to marine conservation, scientific research, education and sharing of knowledge and experiences to ensure our common marine resources are protected for present and future generations.