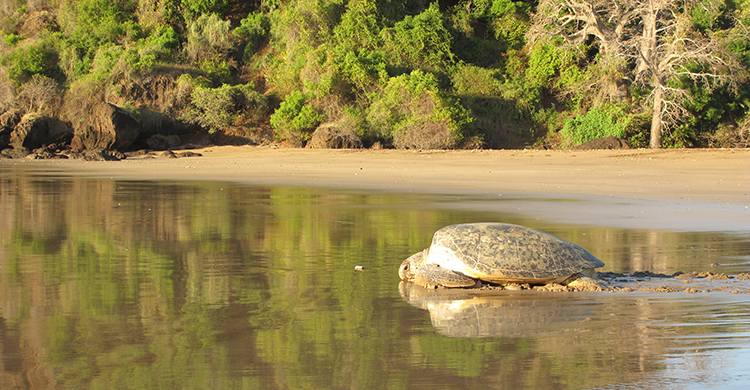 Bonn, 2 February 2019 – At the 13th Conference of the Parties (COP13) held last year in Dubai, Parties to the Ramsar Convention on Wetlands passed a resolution titled: The enhanced conservation of coastal marine turtle habitats and the designation of key areas as Ramsar Sites.

Five out of 7 species of marine turtles are endangered, three of them being critically endangered, according to the endangered species list of the IUCN. One of the main threats to the animals is the degradation of the nesting habitats on the coast, where female turtles lay their eggs and where turtle hatchlings start their lifetime journeys. Other threats include poaching, bycatch, pollution and climate change. Coastal zones (within 100 km of the coast) are home to more than 40% of people on earth with further population growth and tourism putting additional pressure on these ecosystems.

The Convention on the Conservation of Migratory Species of Wild Animals (CMS) and Ramsar have a history of successful cooperation, starting from 1997, when the first Memorandum of Understanding (MOU) between the two multilateral environmental agreements was adopted. The cooperation in the past mostly focused on waterfowl habitat, including coastal wetlands. The newly adopted document, drafted with input from CMS and IOSEA, is the first Ramsar resolution specifically dedicated to protecting marine turtle habitat. It provides an additional tool for national governments to enhance conservation of marine turtles.

The resolution encourages Ramsar Parties to identify important marine turtle nesting and foraging sites and to designate them as Wetlands of International Importance (i.e. Ramsar Sites), based on Criterion 2, that is, simply based on the fact that these coastal wetlands are home to endangered marine turtle species. Governments are encouraged to strengthen this designation by putting additional protection measures in place, particularly through the establishment of marine protected areas. Nominating marine turtle habitat as Ramsar sites can help attract more recognition and funding, placing the management of the site higher on the political agenda.

In addition, Ramsar Parties are obliged to provide compensation for any loss or damage to the Ramsar site, which may occur due to urgent national interests, for example, by creating additional nature reserves in the same area or elsewhere. A number of coastal wetlands, including mangroves and coral reefs are already nominated as Ramsar sites. Governments are now encouraged to adjust the management plans of these existing Ramsar sites to ensure that specific means for the conservation, protection or restoration of coastal habitats for the different marine turtle species are integrated.

The Conference of the Parties requested the Ramsar Secretariat to work closely with CMS, including the MOU on the Conservation and Management of Marine Turtles and their Habitats of the Indian Ocean and South-East Asia (IOSEA Marine Turtles MOU) and the MOU on the Conservation Measures for Marine Turtles of the Atlantic Coast of Africa, as well as the Inter-American Convention for the Protection and Conservation of Sea Turtles (IAC). This enhanced cooperation aims to facilitate the inclusion of marine turtle conservation actions in the Ramsar Parties’ site management plans. Signatories to IOSEA Marine Turtles MOU and CMS Conference of the Parties will have the opportunity to discuss concrete plans in their upcoming meetings in 2019 and 2020 to join forces with Ramsar in protecting marine turtles.