New Release: Assessment of the Conservation Status of Hawksbill Turtles in the IOSEA Region Shows Great Differences Across the Region 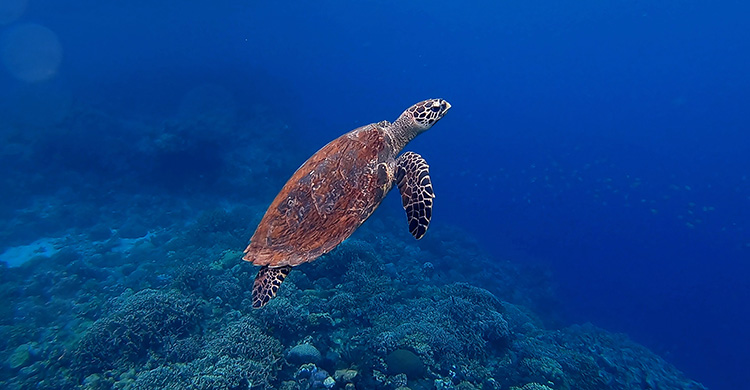 Bonn, 25 March – Launched today at a workshop held as part of the 40th International Sea Turtle Symposium (ISTS40) is the third in a series of species-focused assessments undertaken by the Advisory Committee of the Memorandum of Understanding on the Conservation and Management of Marine Turtles and their Habitats of the Indian Ocean and South-East Asia (IOSEA Marine Turtle MOU). This review provides an overview of what is known about Hawksbill Turtles (Eretmochelys imbricata) in the Indian Ocean South-East Asia (IOSEA) region.

Hawksbill Turtles, famed and often exploited for their beautiful carapaces which were and often still are craved as tortoiseshell, have experienced severe declines over the past century and are classified as Critically Endangered. They occur across all tropical and temperate oceans, and nesting is documented in 32 countries in the IOSEA region.

As occurs with most migratory species, conservation of Hawksbill Turtles is particularly challenging due to their cross-border distribution and long-lived nature. Hawksbill Turtles are comprised of numerous individual populations, which nest in separate locations to one another and display distinct life cycle characteristics. Complicating matters further, nesting turtles from different populations often share foraging destinations and migration routes.

The Assessment highlights that the exact distribution, abundance, biological characteristics and links between habitats used by turtles at different stages of their life cycle are still knowledge gaps for most populations. Collecting these data are necessary for the development of accurate population models used in designing and implementing effective management plans.

The status of knowledge of numerous threats, such as consumptive use of meat and/or eggs by local communities and predators, climate change, coastal development, fisheries impacts and entanglement in discarded fishing gear was summarized for each of the currently identified genetically distinct populations or management units.

The Assessment includes numerous recommendations, which will be brought to the attention of the Signatory States of the IOSEA Marine Turtle MOU for their further consideration. It also provides important input to the development of a Single Species Action Plan for the Hawksbill Turtle in South-East Asia and the Western Pacific under the joint auspices of CMS and the IOSEA Marine Turtle MOU.

The Assessment of the Conservation Status of the Hawksbill Turtle in the Indian Ocean and South-East Asia Region, as well as a separately published Executive Summary, is available as PDF only.

Previous Assessments undertaken by the Advisory Committee cover the Leatherback Turtle (Dermochelys coriacea) (2012) and the Loggerhead Turtle (Caretta caretta) (2013) and can be accessed under Technical Reports on the website of the IOSEA Marine Turtle MOU.

Assessment of the Conservation Status of the Hawksbill Turtle in the Indian Ocean and South-East Asia Region
Marine Turtles 13.70
IOSEA Marine Turtles