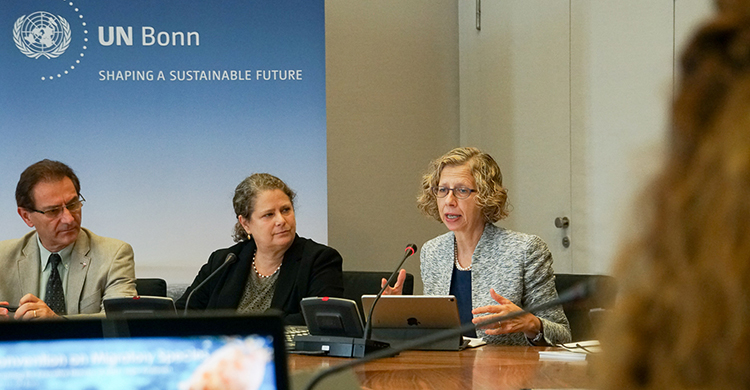 The newly-appointed UN Under-Secretary-General and Executive Director of the UN Environment Programme, Inger Andersen, paid a visit to Bonn to meet the staff of the CMS Family © Aydin Bahramlouian

Bonn, 23 August 2019 – Inger Andersen, the newly-appointed UN Under-Secretary-General and Executive Director of the UN Environment Programme (UNEP), came to Bonn to meet with the staff of the CMS Family as well as other Bonn-based UN agencies.  The visit was part of a series of meetings in Europe, including attending the opening of the Conference of the Parties to the Convention on International Trade in Endangered Species (CITES) in Geneva.

As part of her visit to the UN Bonn Campus, Ms Andersen also participated in a ‘Joint Town Hall Meeting’ alongside the Heads of the United Nations Framework Convention on Climate Change (UNFCCC) and the United Nations Convention to Combat Desertification (UNCCD).  The event was facilitated by the Executive Coordinator of UN Volunteers, which manages the common premises of the UN Campus in Bonn.  During her address, the Executive Director emphasized the importance of all UN agencies working together to achieve common objectives such as the Sustainable Development Goals (SDGs), in addressing the major challenges of climate change and biodiversity loss, and in developing the post-2020 biodiversity framework.

Referring to the inter-connectedness of the problems of our time and to the growing global awareness of the importance of multilateralism, Inger Andersen said:

“With India playing host to several important meetings over the next six months including the UNCCD and CMS COPs, I recall a sign I saw on a bus when I was a very young woman in New Delhi which said: “If everybody shifts a little, there is room for all”.

Turning to the phenomenon of a growing global awareness and calls, especially from the younger generation, for urgent action to tackle the pressing human and environmental challenges, Inger Andersen said:

“The young people are demonstrating on the streets. The media is highly aware. People vote for the environment in the polling booths. And while some would turn their backs on  multilateralism, very few people understand that just like migratory species that fly over borders, so too do the problems of climate, biodiversity, pollution, poverty and land degradation.”

UNEP, with headquarters in Nairobi, Kenya, provides for the administration of the Secretariat of CMS, AEWA and EUROBATS, and is a key partner in the programmatic work of CMS and other multilateral environment agreements.