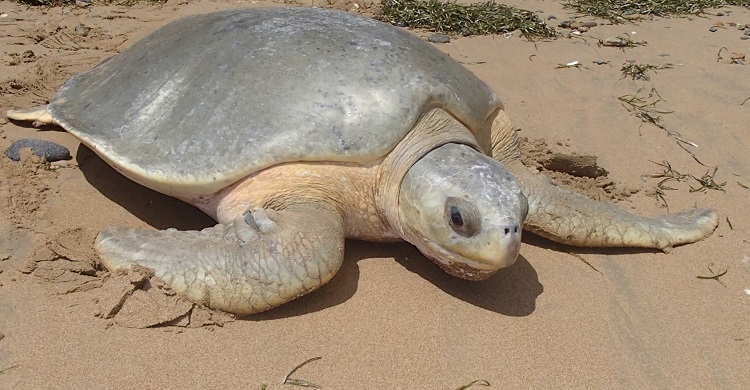 Bonn, 17 December 2021 – The longest-studied Flatback Turtle has returned to one of Australia's key nesting beaches. Known as X23103, this flatback was first flipper-tagged at the nesting beach "Mon Repos" (Queensland, Australia) in 1974, and has been coming back ever since, giving insights into important live-history parameters such as nesting intervals and site fidelity.

This Flatback Turtle was also satellite tagged during the 2015-2016 nesting season. Scientists tracked X23103 all the way from Mon Repos to her foraging area, 645 km further north. She has come down to Mon Repos to lay her eggs every second year after that.

The example of this record-breaking individual illustrates the importance of long-term monitoring. Using a combination of low-tech tools such as flipper tagging and modern approaches such as satellite telemetry, the understanding of wildlife movement, distribution, behaviour, abundance and the impact of anthropogenic threats is greatly enhanced, leading to greatly improved management options for threatened wildlife.

Such research is also crucial to learning about the network of ecosystems used by species during their migration. Identifying and protecting migration routes of threatened wildlife helps to understand ecological connectivity and restore vital migration corridors.

Migratory animals particularly benefit from tracking data. The resulting information helps stakeholders and local governments to decide on how to manage the species' habitats and enables countries to work together for the conservation of wildlife that crosses international boundaries.

Since 1979, Flatbacks have been included in Appendix II of the Convention on Migratory Species (CMS), which covers migratory species that have an unfavourable conservation status and that require international agreements for their conservation and management. Flatback turtles are also covered by the IOSEA Marine Turtle MOU, a regional agreement concluded under the auspices of CMS, which focuses on the conservation and management of marine turtles and their habitats of the Indian Ocean and South-East Asia. Although more data is needed to get a clear picture of their conservation status and knowledge about their population trends is limited, the Australian Government considers the species as vulnerable. Recording the nesting events of this turtle is therefore very special.

During her lifetime, X23103 has been observed laying more than 40 clutches of eggs with a nesting success of 49%. In other words, if a clutch consists of 50 eggs on average, X23103 might have roughly produced 1,000 hatchlings over the past 47 years.

Flatback turtles (Natator depressus) are the only sea turtle species that do not undertake long, open ocean migrations. Flatbacks spend their whole life foraging in the waters of the Australian continental shelf that extends up to Indonesian and New Guinean waters. As occurs with other sea turtle species, Flatback Turtles show high, long-term fidelity to their nesting beaches, which for this species are found exclusively on Australia's sandy shores.

Breeding and Migration Data of X23103