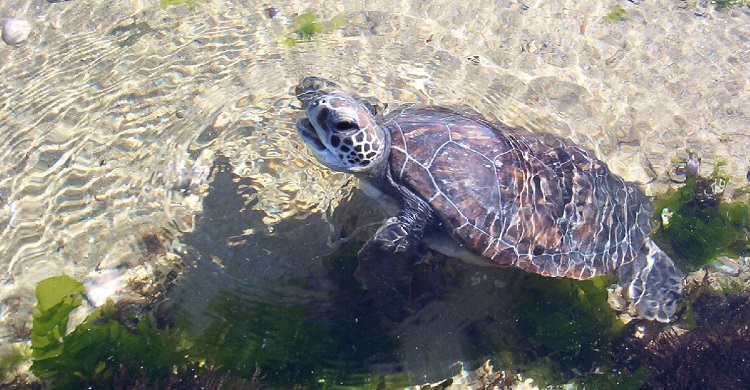 A four-year study was conducted on foraging green sea turtles (Chelonia mydas) in the Northern Persian Gulf and Oman Sea to describe population structure, distribution, habitat preferences, and genetic structure. In total, 139 sea turtles from different size classes were examined at eight sampling sites. Minimum and maximum curved carapace length and weight recorded were 26–96 cm and 2.3–97 kg, respectively. To assess genetic structure and differences we used a total of 62 individuals for the study of mitochondrial DNA. Two main groups with 29 and 33 individuals were detected, including individuals from all sampling sites. A total of 9 haplotypes (different genetic identity) were recognized, with a very high overall diversity (h = 0.8054) which indicates that a large variation of turtles utilize the habitats in the region. Of the nine haplotypes, only three haplotypes had already been reported (one from Australia, two from Saudi Arabia), three new haplotypes were detected and the remaining three were unpublished.

The findings of the study highlight the importance of the habitats in the area, which seems to be the contact zone between the eastern- and western-most green turtle populations of the Indian Ocean. We hypothesize that the turtles inhabiting western waters, including Saudi Arabia, Kuwait and Iran, never leave the Persian Gulf and Oman Sea regions and are always confined to the area. Alternatively, considering the existing food resources and specific conditions, turtles from breeding populations in Oman or other locations may be nomadic in the northern parts of the Oman Sea or the Persian Gulf. The current work not only is the first genetic work on green turtles in Iran, but can also be considered as the first tagging study on foraging green sea turtles in the country. Additional studies on foraging turtles in Iran, as well as work on dispersal of nesting green sea turtles in the country, are needed. Findings of this study demonstrate the importance of the area, especially the islands, as suitable feeding habitats for green sea turtles, particularly at early life stages, underlined by the high numbers of turtles observed.

Considering the formation of an isolated population, new genetic structure, and threatening factors in the region, the green sea turtle populations are in need of conservation measures and more scientific study and research.

The unique characteristics of the Persian Gulf, especially the extreme environmental conditions and the sensitivity of its biodiversity, makes it vulnerable and exposed to substantial changes caused by developments and climate change. Sea turtles are vulnerable to the threats across both their terrestrial and oceanic habitats, which could result in species shifting their distribution and phenology. At the regional scale and in cooperation between range states, the impacts of climate change and developments should be incorporated into the conservation and management plans of threatened sea turtle species.

For more details, please refer to: