New Step for Cooperation in the Arctic 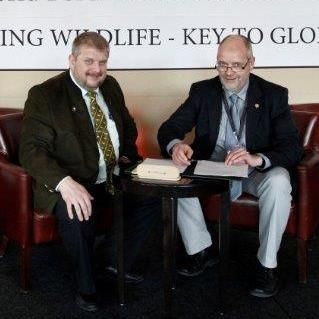 Bonn,
2 May 2013 - The Convention on the Conservation
of Migratory Species of Wild Animals (CMS) and the Arctic
Council’s Conservation of Arctic Flora and Fauna Working
Group (CAFF), have signed a resolution of cooperation, 29
April 2013 in Budapest, Hungary, to better integrate efforts
to protect and conserve Arctic migratory species. The signing
was kindly hosted by the International Council for Game
and Wildlife Conservation in the margins of their 60th General
Assembly.

CMS and CAFF objectives and activities
complement one another. CAFF provides a vehicle for knowledge
and action in the Arctic region while CMS provides an important
global framework for biodiversity efforts for migratory
species. CMS can help place Arctic migratory species within
a global framework while CAFF can help inform CMS on the
status and trends of migratory species in this globally
significant region.

At a global scale 5 major flyways are
identified covering the Western Hemisphere, Africa-Eurasian,
Central Asia, East Asia–Australasia and the Pacific
area. These flyways have in common that they start in the
Arctic, providing important breeding grounds for many species
of migratory birds e.g. several species of geese, swans,
ducks, waders but also raptors and passerines. The Arctic
is also home to several species of migratory marine mammals
that are of interest to CMS.

“The signing of this cooperation
agreement sets the scene for our organizations to work more
closely together, with the aim of improving the conservation
status of the migratory species that use the Arctic during
their annual cycle” said Mr. Bert Lenten, Deputy Executive
Secretary who signed on behalf of CMS.

Evgeny Syroechkovskiy, Chairman of the
CAFF Board, who signed on behalf of CAFF, added that “The
challenge that CAFF faces is that many of our species are
migratory species that only spend part of their annual cycle
within this region. CMS is the only Multilateral Environmental
Agreement that deals with migratory species and is therefore
identified as a key partner for CAFF. By combining our efforts
to conserve ’our migratory species’ within and
outside the Arctic region, we expect to achieve more together
than each of us can separately.”

Cooperation is also relevant on issues
of common interest between CAFF and some of CMS’s
species agreements and memoranda of understanding. This
is already evidenced by CAFF’s resolution of cooperation
with the Agreement on the Conservation of African-Eurasian
Migratory Waterbirds (AEWA), an intergovernmental treaty
dedicated to the conservation of migratory waterbirds and
their habitats across Africa, Europe, the Middle East, Central
Asia, Greenland and the Canadian Archipelago.