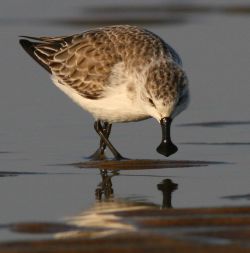 Bonn,
16 June 2011 - Both the BBC and the British newspaper,
the Guardian, have reported on a conservation effort, co-sponsored
by CMS, which is currently under way to help save the highly
endangered Spoon-billed Sandpiper (Eurynorhynchus pygmeus).
Experts fear that the species will go extinct within a decade
unless drastic measures are taken.

Taking their common name from the distinctive shape of
their bills, these waders have declined to possibly as few
as 60 breeding pairs. They spend the summer in the Russian
Arctic before migrating 8,000 kilometres to Myanmar and
Bangladesh; they have also been sighted in Japan, Korea,
China, Thailand and Viet Nam. Habitat loss and bycatch in
nets set to trap other birds are thought to be the main
reasons for the species’ decline.

An emergency mission by a coalition of organizations including
the Wildfowl and Wetlands Trust, Birds Russia, the Royal
Society for the Protection of Birds, the British Trust for
Ornithology, BirdLife International, ArcCona, the Spoon-billed
Sandpiper Task Force and Moscow Zoo aims to collect eggs
from the wild and incubate them to create a captive population,
which after a period of quarantine in Moscow will be housed
at the WWT headquarters in Slimbridge in the UK