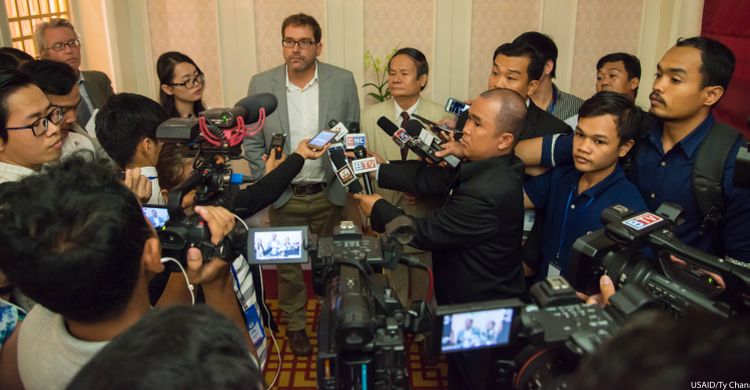 Bonn, 21 February 2017 – Dr Zeb Hogan, the host of the National Geographic TV Show “Monster Fish” and COP-appointed CMS Scientific Councilllor for fish, is leading a new project, the Wonders of the Mekong, which aims to raise awareness of the Mekong River and its associated ecosystem, upon which 60 million people depend.  The project is being funded by US Agency for International Development (USAID).

The five-year project was launched on 7 February at the Raffles le Royal Hotel in Phonm Penh at an event attended by Dr Hogan together with the Cambodian Secretary of State for Agriculture, Forestry and Fisheries, Nao Thuk, and the USAID mission director, Polly Dunford.

“We are also visiting potential research sites around Angkor, the Tonle Sap Lake and River and along the Mekong.  The billions of fish migrating down the Tonle Sap River have a biomass equivalent to the wildebeest of the Serengeti.  We will also be seeking new partnerships to promote World Fish Migration Day, which will next be celebrated on 21 April next year, and to compile a Mekong Fish Migration Atlas in 2018”.

Part of the aims of “Wonders of the Mekong” is to demonstrate the importance of the river’s conservation to the economy of the country and how it contributes to the well-being of its people.  The Mekong, which has an overall length of 2,700 miles (4,300 km) is one of the world’s most productive rivers. The project will also help build partnerships bringing together international researchers and local experts and will also include significant media and awareness-raising components.

The speech made by USAID’s Polly Dunford at the project launch can be read here.

Zeb was also the first winner of the CMS Thesis Award.  He won back in 2005 for his work on “The Ecology, Genetics, and Conservation of Migratory Catfish (Pangasiidae) in the Mekong River”.