Project of the Month: Marking and Monitoring System for Danube Sturgeons 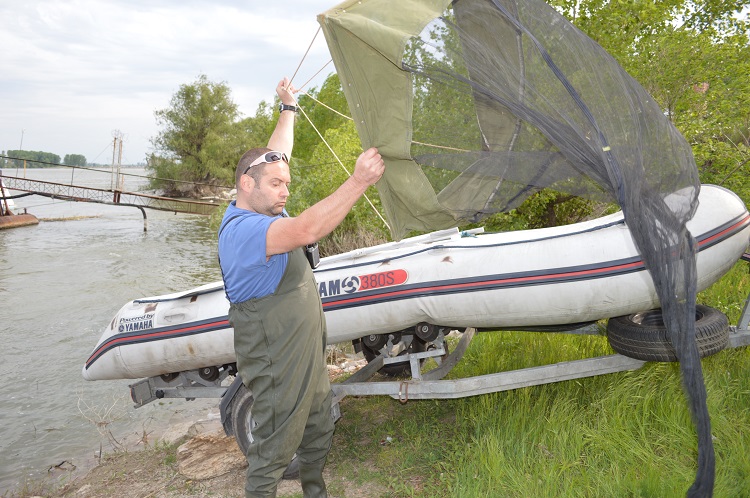 Sturgeons with their long bodies and in many cases their great size belong to one of the oldest existing families of teleost fishes (Osteichthyes). Most of them migrate from coastal waters to spawn in fresh waters. Many sturgeon species are threatened and their populations are dramatically declining. Overexploitation, habitat loss and fragmentation, and disruption of migration routes are the most severe threats to sturgeons.

According to the World Sturgeon Conservation Society, the Danube is the only river system in Europe able to protect the existing but decreasing sturgeon stocks. The decline of Danube sturgeons is clearly documented by the rapidly decreasing catches in the last decades, and any delay of actions is highly detrimental for their survival: in Bulgaria, total annual catches fell from 63.5 t in the 1940s to 25.3 t in 1995-2002, in Romania from approximately 1,144 t in 1940 to less than 8 t in 1995.

To implement conservation measures efficiently, monitoring of sturgeons is essential. However; quantitative information on Danube sturgeon populations and their spawning and overwintering sites is hardly available due to very patchy monitoring.

Against this background, the CMS Small Grants Programme is funding a project contributing to the conservation of sturgeons in the lower part of the Danube river basin. The project aims to implement a comprehensive marking and monitoring system of restocked sturgeons to close the above-mentioned knowledge gaps. The project is being carried out by the WWF Danube-Carpathian Program (DCP) in Bulgaria in coordination with the Bulgarian Ministry of Environment and Water and the Executive Fisheries Agency at the Ministry of Agriculture and Food.

The project will contribute to the implementation of the Bulgarian National Action Plan on Sturgeons. WWF DCP Bulgaria is already implementing activities in this context, including field research of sturgeon habitats, identification of sturgeon spawning grounds along the Bulgarian Danube, strengthening the Danube sturgeon population through restocking with sturgeons of Danube origin, preparation of tri-lateral management measures (Bulgaria-Romania-Serbia) as well as stakeholder networking with scientific (national and international experts) and inter-institutional advisory councils.

Stoyan Mihov, of WWF DCP Bulgaria, explains: “The money from the CMS Small Grants Programme will allow additional data collection and effective marking of sturgeons for restocking. Future actions will focus on the implementation of a comprehensive tagging system, where at least 50,000 young restocked sturgeons are tagged, released (with the participation of institutions, media and local communities) and monitored. The release of tagged sturgeons will not only contribute to strengthen the very low populations in the wild, but it will also ensure the quality of future restocking programmes because the origin of individuals taken for reproduction will be easy to track and inbreeding will be avoided.”

Proper and coordinated marking will enable efficient monitoring and advance knowledge on population data, habitat use and migration routes. Furthermore, the marking system will serve as basis for effective conservation measures at national level, as well as concerted multi-lateral measures of all Lower Danube Range States. All project data, including marking and monitoring results, will be published on an electronic sturgeon portal.