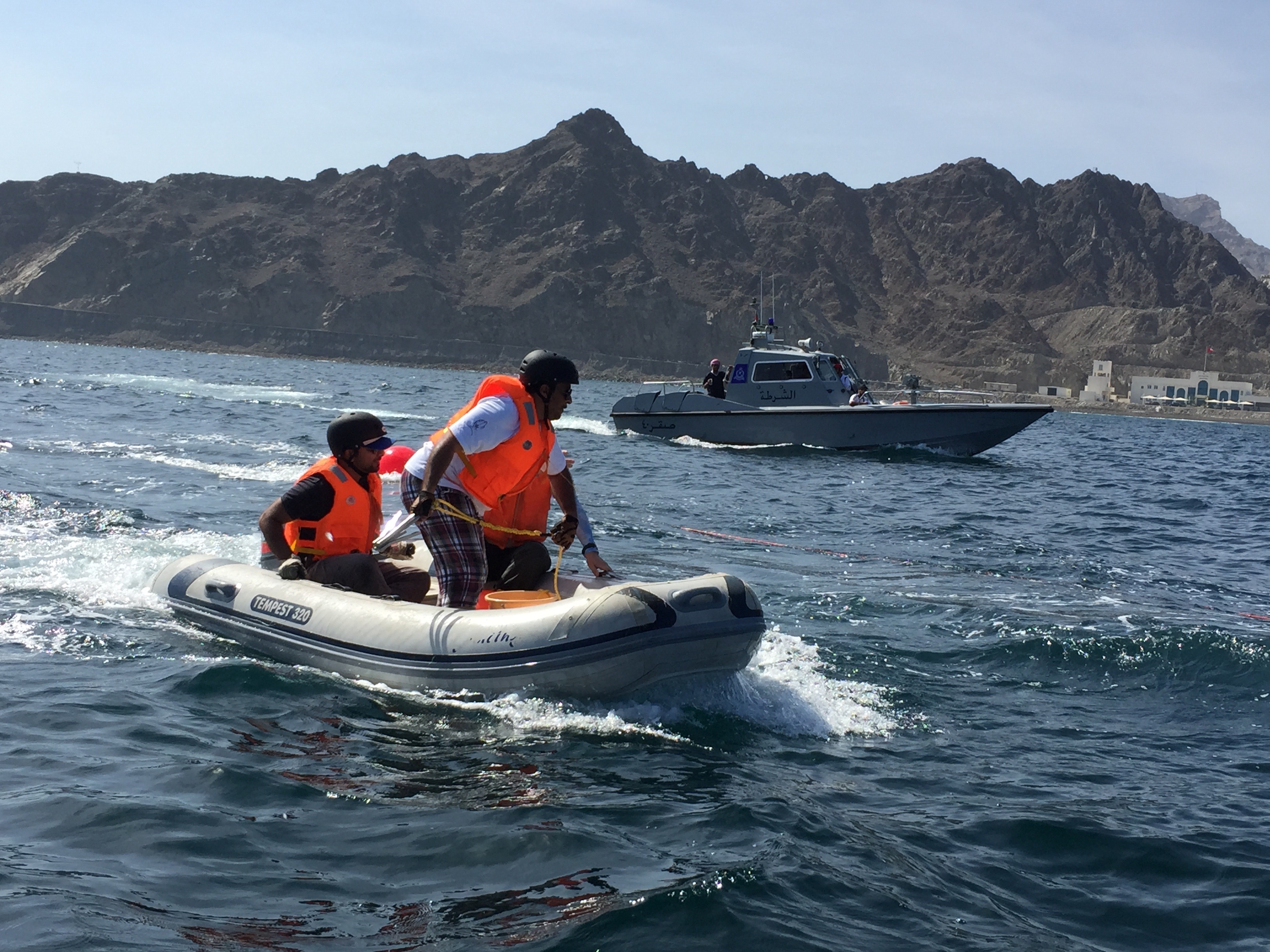 Bonn/Abu Dhabi, 19 November 2015 - In the Indian Ocean (including its adjacent seas and gulfs) the Convention on Migratory Species’ Global Programme of Work for Cetaceans recognizes the need for collaborative action to address entanglement and by-catch as high priorities for the region’s fourteen species and populations listed on the CMS Appendices. The International Whaling Commission’s Global Whale Entanglement Response Network can make a meaningful contribution to reducing the threat posed by entanglement to large whales while supporting implementation of the CMS Global Programme of Work for Cetaceans.

The latest International Whaling Commission (IWC) entanglement training workshop was delivered in Oman in November last week, and has registered a number of significant ‘firsts’.  This was the first entanglement workshop on the Arabian Sea coast, expanding safe and effective entanglement response into a new region.  At the request of the Government of Oman, its remit was extended for the first time to cover both entanglement and stranding responses.  When 36 spinner dolphins were beached nearby, it also became the first of these workshops to handle a real stranding event.

The training was provided by the IWC in partnership with the Center for Coastal Studies, Provincetown USA (CCS)and led by David Mattila who coordinates the Global Entanglement Response Network.  The strandings component of the workshop was conducted by Brian Sharpe of the International Fund for Animal Welfarewho is working with the United States Government (NOAA) and stranding responders from other countries to develop international principles and guidelines for stranding response, similar to the guidelines for entanglement responsethat have been developed by the IWC’s expert group.

The workshop was attended by a wide range of participants including cetacean scientists, a veterinarian from Oman's Royal Court Affairs, and policy officials from organizations including the Ministry of Environment and Climate Affairs (MECA), the Navy, Coastguard, Fisheries bodies and Non-Governmental Organizations.  Lasting a week, two days of classroom theory and boat-based, practical entanglement response training were this time accompanied by two days of training in beach response to stranded cetaceans.  Some of the new skills were tested in an area where spinner dolphins stranded a short distance away.  Sadly the dolphins had been dead for four days.  It was not possible to determine cause of death but the group was able to practice data collection methods learnt at the workshop, for example obtaining accurate records of length, sex and species of the stranded animals. A further two days were also allocated to discussions focused specifically on the Arabian Sea area.

Oman is rich in cetaceans with 17 species, 8 of which are listed on CMS Appendices. Most notable is the Arabian Sea Humpback Whale, which may be critically endangered throughout its limited range thought to include India, Iran, Pakistan, United Arab Emirates (UAE) and Yemen. UAE and Oman are not yet Parties to the Convention on Migratory Species but Oman is a member of IWC. Oman has been a leader in using satellite tagging technology to better understand the movements of the Arabian Sea Humpback Whale which may number only 200 individuals.

Oman also recently hosted an Indian Ocean Tuna Commission (IOTC) workshop to support the implementation of the IOTC Regional Observer Scheme. The workshop was organized by the IOTC Secretariat in cooperation with the CMS Secretariat in Muscat from 18-22 October 2015. The Oman Ministry of Agriculture and Fisheries hosted the workshop. The workshop provided expert training to support the creation and implementation of observer schemes in Oman, Pakistan and Iran with a specific focus on gillnet fisheries. Incidental mortality of migratory marine mammals, marine turtles, sharks and seabirds was an important topic including techniques for release.

Oman’s regional leadership was noted by the workshop which also discussed how to potentially expand this lead through partnerships with the newly formed Arabian Sea Whale Network, CMS and particularly CMS Office – Abu Dhabi. The trainers also ensured that participants were aware of the expert advice available through IWC, on entanglement, stranding, and related issues such as cetacean disease.

As well as IWC and CCS who work in partnership to build entanglement response capacity around the world, the week of training was supported by MECA, the United States Department of the Interior (through a partnership agreement with Oman), IFAW, the Coastguard of Oman and Five Oceans. The experimental format of the workshop delivered a package of training tailored to suit the needs of the Government of Oman and the trainers expressed thanks for the warm welcome and generous hospitality of the MECA and all involved.

Commenting on the successful outcome of the workshop Lyle Glowka, Executive Coordinator, CMS Office – Abu Dhabi said from Abu Dhabi, “With the IWC entanglement and stranding response training workshop hosted by MECA and made available to a wide-range of in-country experts and partners, Oman has once again demonstrated its regional leadership to identify and use ways and means to minimise the threat posed to migratory marine species by by-catch in nets. We congratulate Oman and IWC for their ground breaking work in the Northwest Indian Ocean region and look forward to continued collaboration.”