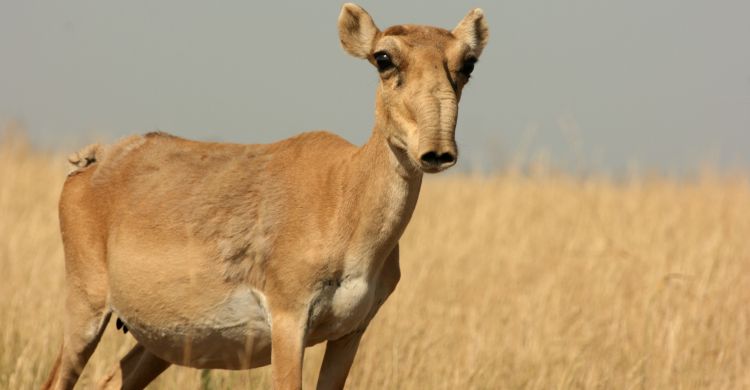 Bonn, 19 May 2015 - About 10,000 saigas have been found dead in Amangeldy district of the Kostanay region in Central Kazakhstan. The Ministry of Agriculture of Kazakhstan reported the first mortality cases on the 12 May, and since then the numbers of dead animals discovered have been increasing. Currently the area affected covers about 16,000 hectares, within the range of the saiga’s Betpak Dala population, the largest in Kazakhstan. The state authorities are investigating the situation in the field, collecting samples for further analysis of the causes and burying the carcasses.

Saiga populations do from time to time suffer from mass mortality events. The most severe known case happened in 1984, when about 100,000 (67 per cent) of the saigas died in the Ural population in Kazakhstan. However, the current case is already the third mass mortality episode to have occurred in recent years.  In the two other cases, similar symptoms caused the deaths of saigas in the Ural population in western Kazakhstan in May 2010 and May 2011, claiming the lives of 12,000 and 500 individuals respectively. The causes of the previous mass mortality incidents could not be conclusively identified. Since 2010 a series of veterinary training sessions have built capacity within Kazakhstan, which will no doubt improve the post mortem analysis and documentation of the current mass mortality event.

The CMS Memorandum of Understanding (MOU) on the Conservation of Saiga Antelopes provides an international umbrella for the conservation of this critically endangered species since it came into force in 2006. All five Range States of the saiga antelope have signed the MOU: Kazakhstan, Mongolia, the Russian Federation, Turkmenistan and Uzbekistan. The implementation of the MOU is guided by the Medium-term International Work Programme (MTIWP) 2011 – 2015. Funds permitting, a Third Meeting of Signatories of the MOU is foreseen for autumn 2015 to discuss the many aspects of saiga conservation including disease management.