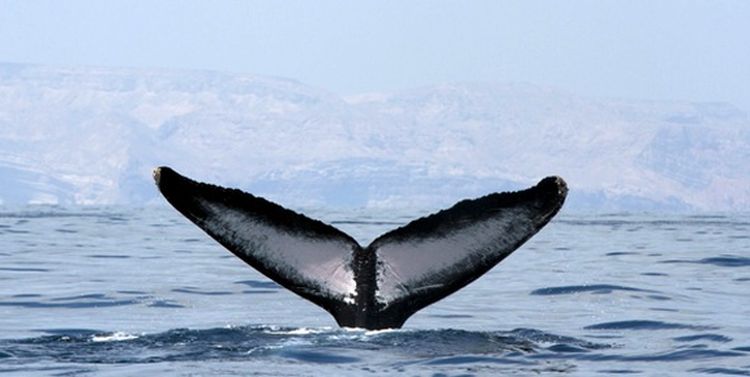 Abu Dhabi, 23 February 2015 - The survival of the humpback whale population in the Arabian Sea, the smallest and most endangered humpback whale population in the world, is threatened by human activities, particularly entanglement in fishing nets, shipping and coastal development. Better information is essential to design conservation actions. To address the problem, the World Wide Fund for Nature (WWF), Emirates Wildlife Society in association with WWF (EWS-WWF)and Wildlife Conservation Society (WCS), with major funding support from the Marine Mammal Commission of the United States of America, convened a workshop of international experts in Dubai, United Arab Emirates from 27 to 29 January 2015. The workshop brought together researchers and conservation organizations in countries bordering the northern Indian Ocean to develop a strategy to conserve these whales. Convention on Migratory Species Office – Abu Dhabi represented the Convention on Migratory Species (CMS) at the meeting.

Unlike other humpback whale populations, which travel predictable migration routes between high latitude feeding grounds and low latitude breeding areas, the Arabian Sea population does not migrate but is restricted to the Arabian Sea, with a range including Oman, Iran, Pakistan and India. These whales may also occur in the Gulf, Red Sea and along the coasts of Yemen, Somalia, Sri Lanka and the northern Maldives. Recent genetic analyses indicate that the Arabian Sea animals are the most isolated humpback whale population in the world. Recordings of the songs that males produce during the mating season along with visual observations and stranding reports indicate that the whales breed along the coast of Oman and possibly along the Pakistan and Indian coasts off the Rann of Kutch. There have been a number of recent sightings of these whales in Pakistani waters along the Baluchistan coast. Unfortunately, there have also been a worrying number of dead whales found stranded on beaches across the region.

Cetacean scientists from regional countries, including Pakistan, Iran, Oman, the UAE, India, Sri Lanka, and the Maldives, as well as experts from the United Kingdom, the USA, South Africa, Italy, and Canada participated in the meeting. The invited experts included representatives from international conservation organizations including the International Union for the Conservation of Nature, CMS, and the International Whaling Commission (IWC), and national organizations such as Environment Society of Oman (ESO) and Plan4theLand (Iran). The regional experts presented updates on the status of these whales in their countries.

Lyle Glowka, Executive Coordinator of CMS Office – Abu Dhabi made a presentation on the framework provided by CMS to conserve Arabian Sea humpback whales and the possibilities for regional cooperation and coordination amongst the Range States, intergovernmental organizations such as CMS and IWC, and the research and conservation community. He said: “The discussions of this workshop highlighted the state of threats in the Northern Indian Ocean marine environment and the need for urgent action to conserve the endangered Arabian Sea humpback population. This is the first step of a collaborative approach that the researchers involved aspire to take further.”

Humpback whales are listed on CMS Appendices I and II and are a Concerted Action Species. Arabian Sea humpback whales were specifically highlighted for particular attention in the CMS Scientific Council’s triennial review of concerted action in 2014 (see UNEP/CMS/ScC18/Inf.6.1.1). Port development and ship traffic, entanglement in fishing nets, genetic bottlenecks and disease may threaten what the workshop participants acknowledged may be a population averaging only 100 individuals in the waters off Oman.

General discussion led to the conclusion that the Arabian Sea humpback whale population is at great risk of extinction and that research should be undertaken immediately to inform conservation measures. The workshop stressed the need for a regionally collaborative research and conservation programme, including scientific surveys to estimate population size and current distribution, collection of further information on the whales’ biology and ecology, and working with different industries to reduce adverse human impacts on these whales. Any actions taken to protect humpback whales would also benefit other large whale species in the region, including the Blue whale and Bryde’s whale, which are listed respectively on CMS Appendices I and II and CMS Appendix II.