Dr. Alfred Oteng-Yeboah Among the Winners of this Year’s MIDORI Prize for Biodiversity 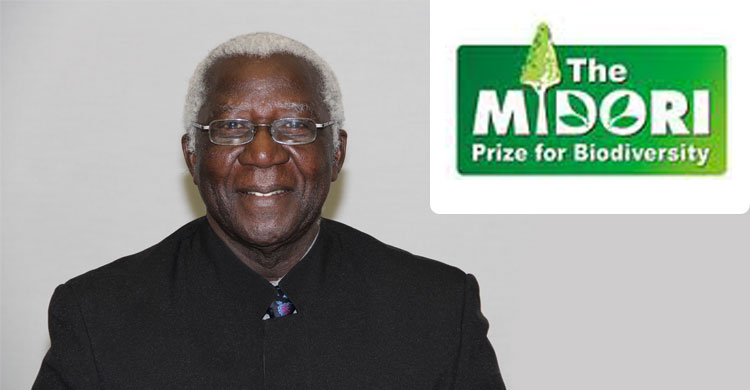 Dr. Alfred Oteng-Yeboah, winner of the MIDORI Prize for Biodiversity 2014

Bonn, 16 September 2014 – CMS congratulates Dr. Alfred Oteng-Yeboah, who is one of the winners of the MIDORI Prize for Biodiversity 2014.

Dr. Oteng-Yeboah is the Chair of the Ghana National Biodiversity Committee and has been the Chair of the CMS Standing Committee since 2011 as well as the COP-appointed Scientific Councillor for African Fauna. He is a leading advocate of biodiversity in Africa. In addition, he has fulfilled important roles as a representative of Ghana and Africa in major meetings related to conservation and the sustainable use of biodiversity including significant contributions to the Convention on Biological Diversity and other biodiversity-related processes. He also involved in the establishment and management of the Intergovernmental Science-Policy Platform on Biodiversity and Ecosystem Services (IPBES).

The other two 2014 winners of the award are: Dr. Kamal Bawa, President, Ashoka Trust for Research in Ecology and the Environment (ATREE), India and Distinguished Professor at the University of Massachusetts, Boston, USA and Dr. Bibiana Vilá, Principal Researcher, National Research Council (CONICET) and Director of Vicuñas, Camelids and Environment (VICAM), Argentina.

The MIDORI Prize for Biodiversity was established in 2010 on the occasion of the twentieth anniversary of the AEON Environmental Foundation, which coincided with the celebration of the International Year of Biodiversity. The MIDORI Prize honours three individuals who have made outstanding contributions to conservation and sustainable use at local and global levels, and who have influenced various biodiversity-related efforts, as well as raising awareness about biodiversity. Each winner receives a certificate, a commemorative gift and a monetary prize of US$100,000. The year 2014 is the third time the MIDORI Prize has been awarded.

For more information please visit the CBD website at: http://www.cbd.int/cooperation/midori/