Project of the Month: Participatory Community Monitoring of Humpback Whales in Costa Rica 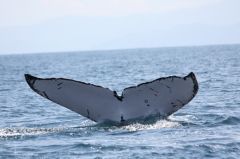 Bonn, 22 October 2013 - The humpback whale (Megaptera novaeangliae) is listed on CMS Appendix I and is the most common species of baleen whale in the Pacific coastal waters of Costa Rica. Individuals from both the austral and boreal populations have been observed in the region, migrating from their feeding grounds in colder, temperate waters to the tropical waters of Costa Rica to breed and reproduce. Their regular, predictable presence allows the whale watching industry to be of high economic importance, therefore making this species crucial to the income of many coastal rural communities. However, this also means that the extensive marine tourism activities could pose a threat to the whales.

The CMS Small Grants Programme has chosen to support a project of Costa Rica’s Fundación Keto. The main aims are to conduct research on the humpbacks observed annually in the region and to collaborate with local communities and national authorities in order to increase awareness of marine conservation, ensuring a sustainable, non-detrimental exchange between tourism and the migratory whales. 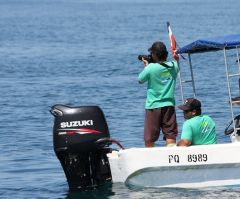 Humpback whale surveys are being carried out along the coast of Costa Rica. During each encounter, the following information is recorded: date, start and end times, geographical position, engine type of survey vessel, sea state, behaviour of the group, group size, spatial organization, approximate area occupied the group and the presence/number of calves and juveniles. Photos are also taken during the encounters in order to identify individuals by markings on the ventral surface of their flukes and the shape of the dorsal fin. This helps to determine distribution patterns and assists in recognizing critical areas of concern. Furthermore, Keto employees give technical training to community members and tour operators so that research can continue in the future, and a long-term data set can be established. In addition, the project monitors interactions with whale watch operators in Osa, southern Costa Rica, and records data on the amount and types of vessels present during sightings, and the reaction of individual whales to how the boats approach.

From November 2012 to August 2013 more than 130 sightings had been made in this participatory programme from both populations of humpbacks whales in the coastal waters of Osa peninsula (162 trips, >545 hours at sea, >11,000 km travelled), where the most common group composition was a mother with a calf and preliminary results show that more than 25 mothers have been identified in the area based on the shape of the dorsal fin and a further 25 adults using the coloration in theirs flukes.

The outcomes of the project will be presented to international conservation organizations, national authorities, local communities and tour operators in order to reinforce the need for existing and future marine protected areas and to strengthen the management of specific whale watching regulations in Costa Rica. This will also demonstrate that cooperation between NGOs and local people can provide benefits to migratory species. Negative impacts on the humpback whales from tourism can therefore be regulated and mitigated to ensure minimum disruption in such an important region.