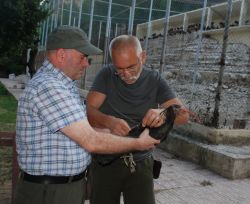 Bonn,
12 August 2013 - Following a successful breeding
season for the semi-wild Northern Bald Ibis population at
Birecik, SE Turkey, six of the birds were released as part
of trial reintroductions work in late July. A dedicated
team first caught up all the birds for the annual ringing/check
of the birds at the Birecik ‘Kelaynak’ breeding
station run by the Turkish Ministry of Nature Protection
and National Parks, and six birds were selected for release
in the hope that they may survive and migrate. Three of
the six ibis were fitted with satellite transmitters, and
to reduce the chance of persecution, their brighter rings
were replaced with much less conspicuous ones. Four of the
birds were 2013 juveniles and in addition two one-year old
birds were also released.

For the first two weeks, the birds remained
very close to the breeding station, but feeding at a number
of local sites in the area, as well as taking supplementary
food provided. This week however, excitement mounts as five
of the birds have departed south, and the intriguing news
is that they have stopped off very close to Palmyra, where
the remaining wild population there has this year sadly
declined to just one individual.

Whether the birds will stay in the area
or continue their ‘migration’ further south,
we will find out from the satellite signals. The work was
recommended as a priority at last year’s inaugural
meeting of the AEWA International Working Group for Northern
Bald Ibis, held at Jazan in Saudi Arabia and by the International
Advisory Group for Northern Bald Ibis (IAGNBI). Several
partners are involved in the work in addition to the Turkish
Ministry, with satellite tags provided by Doga Dernegi (BirdLife
partner in Turkey), with Prince Albert II of Monaco Foundation
and RSPB support.