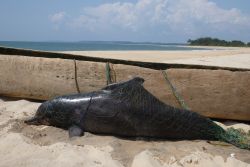 Bonn,
3 June 2013 - The Atlantic humpback dolphin (Sousa
teuszii) is endemic to the tropical and sub-tropical
nearshore waters of western Africa, including some large
estuaries and mangrove systems. Evidence suggests that the
species distribution is limited to eight or nine sub-populations
in nine African states, with limited or no connectivity
between them. None of the groups is thought to be larger
than a few hundred animals, although some are likely to
be even smaller. The species has and is experiencing potentially
catastrophic declines due to increasing catches (both targeted
and accidental) by artisanal fishermen, habitat loss and
anthropogenic disturbance. Without immediate, sustained
and effective conservation measures the species risks extirpation
in many areas.

The Atlantic humpback dolpin is listed
on CMS Appendix I and is also central to the regional CMS
MoU Concerning the Conservation of the Manatee and Small
Cetaceans of Western Africa and Macaronesia. It is currently
categorized by the IUCN as Vulnerable, with a revision to
Endangered recommended by the IWC Scientific Committee in
2010. 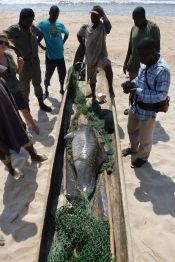 The
CMS Small Grants Programme project focuses on the small
population in Gabon and Congo, countries which include some
of the most intact coastal humpback dolphin habitats on
the Atlantic coast of Africa. Human population densitities
are low, which is why these coasts may represent one of
the last great hopes for this species. Given appropriate
conservation actions biologically functional populations
of humpback and other coastal dolphins can be preserved
here. In 2008, the Wildlife Conservation Society (WCS) started
the 'Atlantic Humpback Dolphin Conservation Project' and
in 2011 launched the ‘Congo
Basin Coast’ programme (CBC), a comprehensive
conservation project covering the coastal waters of Gabon
and Congo that focuses on the unique assemblage of habitats
and species of the Central West African coast. In partnership
with relevant government agencies in Congo and the local
NGO COGEREN, WCS is seeking to actively engage and support
local fishing communities in conservation efforts. Working
with local NGOs is in fact essential; comprised typically
of elder fishermen and ‘sages’ who are deeply
aware of the changes in abundance of wildlife in the area,
they are able to translate complex conservation messages
to relevant communities using local dialects, as well as
traditional knowledge and metaphors.

The principal aim of the project is to
significantly reduce humpback dolphin by-catch in Congo,
and to increase public awareness and local support for their
conservation. CMS funds are supporting activities during
2013, and include the establishment of inshore fisheries
exclusion zones, developing a compensation scheme for fishers
who release dolphins alive, and establishing a fisher-led
reporting and ‘reaction network’ that will also
ensure the fishermen’s safety during rescue attempts.
In parallel, outreach workshops, training for teachers and
wildlife managers, as well as supporting the implementation
of a marine conservation class module in local schools are
being organized in partnership with local authorities and
NGOs.

The activities planned will also bring
substantial benefits for other species in the area, such
as other dolphin species and nesting marine turtles. Patrols
against illegal fishing (funded by IUCN
SOS) in the exclusion zones may also help fish
stocks to recover to sustainable levels and thus restore
catches and associated incomes of artisanal fishermen. This
could reduce demand for alternative sources of cash such
as dolphin bushmeat.

THE PROJECT OF
THE MONTH

During the 2012 round
of the Small Grant Programme a total of 75 applications
was received and 12 projects were selected for funding.
In the coming months each of these projects will be featured
on the CMS website in a new “Project of the Month”
series that will show the activities that are taking place
within each project and the conservation impact on the species
concerned.

The Small Grant Programme
supports projects that are implemented on the ground with
a strong focus on the conservation of species listed in
the CMS Appendixes. It shows that CMS can really make a
difference when it comes to improving the status of the
species concerned working in close contact with the local
communities.

During the period 2012-2014
the Programme is being generously funded by UNEP.