Project of the Month: Supporting Tajikistan in Transboundary Cooperation on Snow Leopards 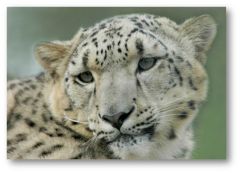 Bonn,
1 April 2013 - Snow Leopards (Uncia uncia)
live in the high mountains of Central Asia, with core areas
including the Altai, Tian Shan, Kun Lun, Pamir, Hindu Kush,
Karakorum and Himalayan ranges. Across this range, Snow
Leopards are suspected to have declined by at least 20 per
cent over the past two generations (16 years) due to poaching,
reduction of the prey base and habitat loss. Snow Leopards
and their fragile mountain habitats are also considered
to be at particular risk from climate change.

As a consequence, Snow Leopards are listed
on CMS Appendix I and further designated for Concerted Action
(CMS Resolution 7.1). They are also categorized as Endangered
by the IUCN, and listed on Appendix I of the Convention
on International Trade in Endangered Species of Wild Flora
and Fauna (CITES).

The Snow Leopard population in the Pamir
Mountains of Tajikistan counts about 180–220 individuals,
which form a key link to populations in Kyrgyzstan and the
Tien Shan mountains to the North, and Afghanistan and the
Hindu Kush to the South. Together, Tajikistan, Kyrgyzstan
and Afghanistan constitute a crucial bottleneck in Snow
Leopard distribution through the “Mountains of Central
Asia” biodiversity hotspot.

Against this background, the CMS Small
Grants Programme is pleased to be funding a project supporting
Tajikistan to lead on transboundary cooperation on Snow
Leopards. The project is being implemented by Flora &
Fauna International in collaboration with the Department
of Forestry and Hunting under the Committee of Environmental
Protection of the Republic of Tajikistan. Other collaborating
partners include governmental and non-governmental agencies
from Afghanistan, Kyrgyzstan and Tajikistan, as well as
Panthera, an NGO focusing on the conservation of wild cats.

The
key goal of the project is to bring the three countries
together to coordinate activities on Snow Leopards and other
migratory species that cross the borders between these States.
The project therefore promotes collaboration and cooperation
among the three countries, and encourages and supports the
Tajikistan government to play a leading role in regional
coordination activities. The project also helps build the
capacity within the Snow Leopard’s Range States —
through training, mentoring and network development —
to develop and implement species action planning.

Project leader, Paul Hotham of Flora &
Fauna International, is confident that the project will
result in a closer alignment among the three countries.
This alignment would greatly facilitate, for example, the
coordination of existing and planned National Snow Leopard
Action Plans, the incorporation of national action planning
into the CMS framework, and the enhancement of concerted
actions for the conservation of Snow Leopards. The project
also complements efforts of the World Bank Global Tiger
Initiative to develop a Global Snow Leopard Ecosystem Protection
Programme to be adopted at the International Snow Leopard
Conservation Forum to be hosted by the Kyrgyz Government
in August 2013.

Mr. Hotham also expressed his hope that
closer collaboration among the countries will lead to the
designation of further CMS actions to protect these transboundary
populations, and help non-Parties see the benefits of involvement
with the CMS.

The project will significantly contribute
to the implementation of the Central-Eurasian Aridland Mammals
Concerted Action, which was established by COP9 in 2008
in Rome, and its associated Action Plan. It also further
implements objectives of another CMS resolution adopted
in Rome on the conservation of Asian Big Cats (CMS Resolution
9.3).

THE PROJECT OF
THE MONTH

During the 2012 round
of the Small Grant Programme a total of 75 applications
was received and 12 projects were selected for funding.
In the coming months each of these projects will be featured
on the CMS website in a new “Project of the Month”
series that will show the activities that are taking place
within each project and the conservation impact on the species
concerned.

The Small Grant Programme
supports projects that are implemented on the ground with
a strong focus on the conservation of species listed in
the CMS Appendixes. It shows that CMS can really make a
difference when it comes to improving the status of the
species concerned working in close contact with the local
communities.

During the period 2012-2014
the Programme is being generously funded by UNEP.