Extinction Risk and Conservation of the World's Sharks and Rays

This report presents systematic analysis of threat for a globally distributed lineage of 1,041 chondrichthyan fishes-sharks, rays, and chimaeras. The report estimates that one-quarter are threatened according to IUCN Red List criteria due to overfishing (targeted and incidental). The results show that large-bodied, shallow-water species are at greatest risk and five out of the seven most threatened families are rays. Overall chondrichthyan extinction risk is substantially higher than for most other vertebrates, and only one-third of species are considered safe. Population depletion has occurred throughout the world's ice-free waters, but is particularly prevalent in the Indo-Pacific Biodiversity Triangle and Mediterranean Sea. 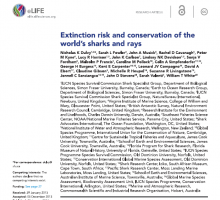